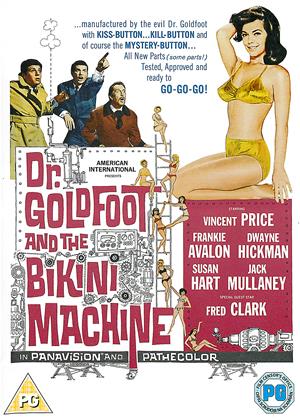 Rent other films like Dr. Goldfoot and the Bikini Machine

Reviews (1) of Dr. Goldfoot and the Bikini Machine

I'll watch almost anything with Vincent Price in it, but I gave up halfway through this incoherent abomination. On the plus side, Vincent seems to be enjoying himself as a supervillain even Austin Powers wouldn't take seriously. On the minus side, there's everything else.

About three-quarters of the time, this film seems to be aimed at very young children, from the horrible performances of everyone other than Vincent Price - to call it overacting would be paying it a compliment, since even overacting is technically acting - to the Chuckle Brothers level of the "humour", much of which involves face-pulling, funny walks, and stupid people accidentally hitting each other with furniture and yelling. Except that the very mild but very numerous sexual innuendoes, a level of relentless sexism only an early sixties comedy is capable of, and the constant shots of gorgeous women wandering around in bikinis for no good reason suggest that its target audience is mentally subnormal adults.

Justly forgotten bland teen idol pop singer Frankie Avalon is excruciatingly dreadful as "secret agent double oh and a half", soon demoted to "double oh and a quarter", which is probably the funniest and cleverest joke in the film. The girls can't be blamed for giving atrocious performances, since they're all supposed to be robots unconvincingly pretending to be human, but the men have no excuse. And boy, could they use one! Seriously, this dreck makes "In Like Flint" look like "Skyfall"! It's not even "so bad it's good", because comedies that fail dismally to be funny cannot by definition be unintentionally funny. Give it a miss.

By the way, there's a sequel which by all accounts is very considerably worse. I'm almost tempted to give it a quick look just to see how that's possible, but I'll try to resist the temptation. I strongly suspect I'll succeed.