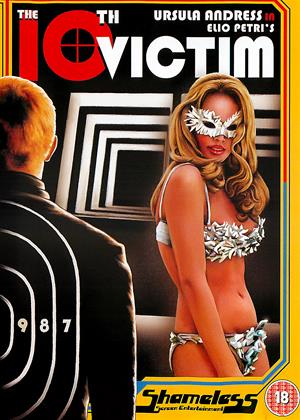 Ooooh, I could kill for a cuppa... - The 10th Victim review by Count Otto Black

I see the word "classic" is used no less than three times to categorise this movie, which on this site, with its very special idea of what constitutes a "classic", is seldom a good sign. And sure enough, this film is obscure for the very good reason that it's a bit rubbish, in that uniquely sixties Italian arthouse movie "all dressed up and no place to go" kind of way. It takes place in one of those dystopian near-futures that look exactly like the decade in which they were filmed, only the clothes are even sillier, computers are so advanced they can talk (but are still the size of a barn and use punch-cards), and the entire population of the world is obsessed with something so stupid that you expect Captain Kirk to beam down and explain why they're wrong by punching all the men, kissing all the women, and getting his shirt ripped. And I wish he had, because it would have livened things up considerably.

The backstory is that wars and other similar unpleasantnesses have been rendered obsolete by allowing anyone who feels like letting off steam in that way to join The Great Hunt, a media circus in which consenting adults become celebrities by attempting to murder each other. The twist is, they have to take turns as hunter and hunted. And only by surviving ten rounds, five of which put them at a severe disadvantage, can they win the jackpot and become superstars, something we are told only 15 people have ever achieved. There's a pretty good, perhaps even great movie to be made about that.

Sadly this isn't it. Imagine a version of "A Clockwork Orange" in which two smugly handsome people chat each other up in that bar where they serve legal high milkshakes, or just stroll around admiring the scenery and flirting wittily, while every so often Alex and his droogs pop up in the background for a minute or two and give us a fleeting glimpse of this plastic utopia's dark side. Well, it's like that. The weirdest and by far the most famous scene, which of course features prominently on the packaging, comes about five minutes into the movie, and after that we see almost nothing of the ruthless manhunt the film's allegedly about, other than brief moments of mostly very clumsy black comedy in which the main characters randomly encounter anonymous extras trying to shoot each other in public places while everyone else ignores them.

The main problem is that the huntress trying to achieve the glory of becoming a "decathlete" kills her penultimate victim during the prologue, and is thus one pull of the trigger away from her goal with 90% of the movie still to go. Why does it take her so long to make her move? Because she wants to do it in a specific place where a camera crew are waiting to turn it into a commercial for, of all things, tea. As movie motivations go, that's almost as bad as that Bond villain who attempted to start World War III just to sell more newspapers! She'll be rich and famous the moment she pulls that trigger, so why risk her life for a few extra bucks? Because if she didn't, this movie would end an hour and a quarter before the credits are meant to roll, that's why.