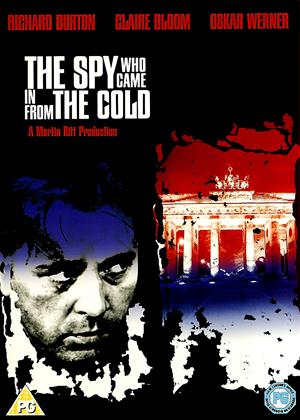 Reviews (1) of The Spy Who Came in from the Cold

Cold War Classic. - The Spy Who Came in from the Cold review by Steve

Surely there's only one candidate for the best spy film ever made? Martin Ritt, another Hollywood outsider ostracised by the Communist witch hunt in America, was an ideal choice to direct this story of lies, subterfuge and betrayal in East Berlin.

It is accomplished on every level, particularly the superb support cast giving flesh to the layers of administration, the laconic, elliptical dialogue; the ultra realistic design. The greys of its black and white palette are perfect to create the spy-procedural prototype which this film invented, annexing new wave realism to the glacial surfaces of John le Carre's cold war classic.

It introduced to us an unfamiliar world, to the sedate bureaucracy of MI6, to checkpoint charlie, and the wall. Richard Burton gives his greatest performance as a burned out case, a spy who has been out in operation for too long, and who is starting to think too much about the ethics of his work. Control has an idea for how Leamas (Burton) can save their man in East Berlin, but it's not the clever, cynical double cross that he actually shares with his operative; he has a deeper more devious scheme.

What unfolds is the most brilliant narrative of any film ever made. Most precious of all is the audaciousness of Le Carre's sleight of hand, which disorientates our moral perspective, and finds Leamas at the wall, with one last chance to resist the dehumanising machinations of the Whitehall Circus.