Rent Witness for the Prosecution (1957) 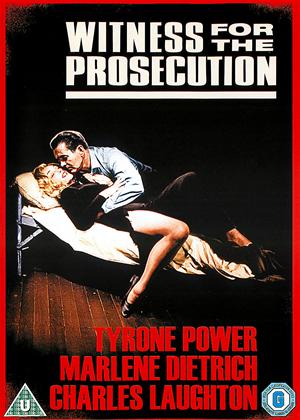 Reviews (5) of Witness for the Prosecution

They don't make them this any more! Black-and-white courtroom drama set in 1952 with Charles Laughton (barrister), Marlene Dietrich (glamorous wife of the accused) and Tyrone Power (accused of murder). Whodunnit? There's a voiceover the end credits asking the audience not to tell, so I won't :)

Based on an Agatha Christie play from her own short story it's a fairly straightforward tale. But what sets it apart is the acting, particularly from Laughton and Dietrich. The role played by Tyrone power is fine - he comes across as a 'hammy' actor, but that is just right for the role.

I enjoyed it very much and there are some good comic touches too. There are however some bits that grate on me... It's a Hollywood drama (director Billy Wilder) so perhaps it's unsurprising there are courtroom errors, but the characterisation of Tyrone Power (an American) serving in the RAF but somehow managing to give his new German wife a British passport seemed all a bit odd. And as we all know, there are no 'Perry Mason moments' of last minute evidence in British courts...

That apart, it's a fine drama and fully deserves its IMDB score of 8.4. I'll give it 4/5 stars - highly recommended.

This is a superb film - a courtroom thriller - starring some real legends: the great British actor Charles Laughton who won an Oscar for his portrayal of Henry VIII in the 1930s, and even Marlene Dietrich too!

The lead Tyrone Power is a bit odd - with an American accent yet he served in the RAF in WWII which is never explained, but the demands of box office audiences meant producers then (and now) pandered to what they (and esp the female audience) wanted and Tyrone Power was a heart-throb of his day.

The plot is pure Agatha Christie - based on a short story original called 'Traitor Hands' - it has typical twists, mistaken identity, and the last minute reveal JUST like a magician's trick. This is Christie's hallmark. It makes for unrealistic drama (NO British court would allow last-minute reveals like this) but riveting drama.

Apparently, Ben Affleck is in talks to a direct a new movie version with Matt Damon - one wonders how much these over-rated Hollywood types with mess it up (and the great big lie that was 'Argo').

But anyway, a fine drama. The BBC made a drama with Toby Jones broadcast on 26 and 27th December 2016 which totally changed the ending and added unnecessary female characters (which writers are ordered to do now to placate the diversity departments and attract the easy meat female viewers). No need for all that though as this is the better version, and the one to watch.

I'm a big fan of Billy Wilder but found this film to be simply unbelievable. A very unrealistic film which left me annoyed rather than surprised at the double twist ending. The acting was often hammy and the humour didn't work for me. Some scenes made me cringe such as the one where Dietrich is incredibly badly dubbed.

Overall, I found it to be completely over rated.

Good old Agatha - Witness for the Prosecution review by NO

Very good,although I guessed part of the end when Laughton said he wasnt satisfied but not the final twist.It shows there is no need for crazy

car chases or exploding bombs etc ,just a good story.Its a pity Hollywood doesnt make films like this any more.Girls where I worked said they would not watch it as it was black & white,but I do not think you need Colour if you have a good plot & decent actors.

Classic Courtroom Drama - Witness for the Prosecution review by GI

Adapted by director Billy Wilder from Agatha Christie's celebrated play this is the quintessential courtroom drama and a film with so much intrigue and twists in the plot they even put a request in the credits not to reveal the story. Full of tour de force performances from stars Tyrone Power (in his last film, he died a year later aged only 44), Marlene Dietrich and Charles Laughton, who is exceptional here, this is a must see film. A true classic of cinema. Laughton plays Sir Wilfred Roberts, a famous barrister, who despite recovering from a heart attack agrees to defend Leonard Vole (Power), accused of murdering a rich widow. Sir Wilfred is convinced of his client's innocence despite overwhelming circumstantial evidence of his guilt. But the prosecution call a surprising witness which threatens the entire defence and Sir Wilfred suspects something isn't right. The main courtroom of the Old Bailey was faithfully reproduced as the main set where most of the film takes place and there's also small clues to the films puzzle if you are on the ball to spot them. It matters not because this is such a cleverly told tale that it keeps you hooked throughout and in many ways it's a whodunnit. Added into the mix is a good dose of humour especially in Laughton's grumpy barrister and his feud with his domineering nurse played by his real life wife Elsa Lanchester. Brilliantly written, edited and directed this is a fantastic film, remade a few times but this is the one to seek out it's a real joy.