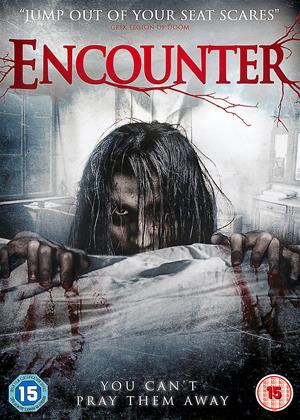 Possibly the least welcoming landlord ever, Jim (Don Scribner), shows a likeable newlywed couple Lauren (Andrea Nelson) and Ted (Justin Arnold), around his spacious house. They are renting a room from him, he tells them they look like good kids and that his family is dead. To him. In the way of such things, the couple are not tempted to take back their deposit and find somewhere - anywhere - else, and Ted’s studies into ‘orbs’ necessitate he decks the area out with cameras, Paranormal Activity-style.

When the inevitable strange sounds keep the couple awake at night, Ted has a word with Jim, who is sitting in silence in the kitchen, cleaning a shotgun. Still the newlyweds are disinclined to leave, even after Jim’s later suicide attempt.

The acting here is exemplary. Nelson (who bears a marked resemblance to Elsa Lanchester in certain scenes) and Arnold display a believable chemistry, with Ted’s usually placid personality stretched to the limit. Lauren is more pragmatic. She suggests a séance, which appears merely to exacerbate the hauntings.

Only when both of them have been marked with the same sign that afflicted the departed Jim does Ted look up the residence on the internet to find strange things have long since been happening – cattle stripped of their reproductive organs, tongues etc. We then appear to come full circle, with Lauren waking up in darkness, in a field, in a scene which opened the film (the rest happening in flashback).

A weird dislocated scene in which shadowed aliens appear to be delivering Lauren’s child aside, there are no special effects here. Illogical events like their decision not to leave, and the impossibility of some climactic scenes being filmed (when until that point, the film is very much of the found-footage school) never fail to rankle, yet much else about ‘Encounter’ is extremely good – the claustrophobic setting, the performances, the gentle ramping up of strange happenings. The ending, which is open-ended in the extreme, is either exasperating, or highly powerful, depending on your point of view. In a reversal of ‘The Blair Witch Project (1999)’, interviews with residents, shedding possible light on events, appear at the close, rather than at the beginning, providing a retrospective assessment of Lovecraftian possibilities. Very enjoyable.