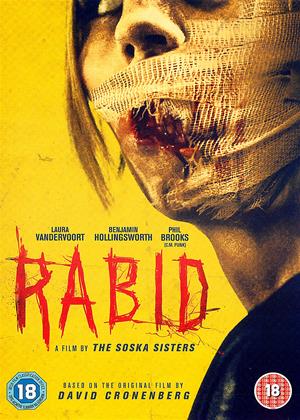 Good remake for 50% of the film - Rabid review by Tom

As a remake of a rather good early Cronenburg film, this was a hard act to follow. The first half of the film is actually rather good, with a deal of suspense building to the action orientated 2nd half. Sadly, the film than morphs into a rather odd and ambling mess. The result is a rather unsatisfactory and pointless look at immortality for no particular reason.

Whilst essentially a loose remake of 1977's 'Rabid', this film actually has echoes of several Cronenberg films, with moments harking back to the likes of 'Shivers', 'The Brood' and even 'Dead Ringers'. Some of the lead actors, and indeed several entire scenes, feel unconvincing and a bit on the amateur dramatic side - but there is a partial out given in that we are not sure exactly which scenes are 'real' and hallucinations, plus kooky , over the top and downright weird performances and moments were part and parcel of most of Cronenberg's best films, so it's hardly bad form. The full-on tentacle waving body horror of the climax is both slightly ludicrous and entirely in keeping with the source material.

It's by no means perfect, and it goes without saying that ultimately as a remake this isn't an improvement on Cronenberg's original - but it does come across as a well-meaning and solid tribute to the director's unique brand of body horror. [3.5 out of 5]

This was Soo Boring I almost Forgot to write a review for it .

The main Female Lead is such a Miserable Baggage that when she gets around to Killing innocent people she actually seems a lot friendlier tbh .

Do yourself a favour and watch the original from the 1970's by David Cronenberg ,its a Much Better Movie.

I actually gave up on this before it finished . my mind just wandered and I ended up on facebook scrolling instead I was so bored .

It isn't Total Crap to be fair,but it also isn't Good either .

I never want to sit through it again anyway .