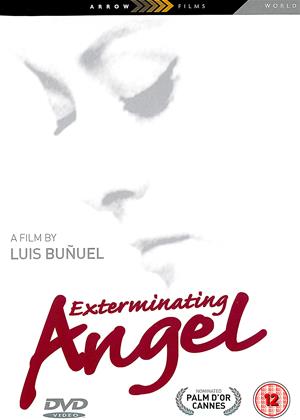 Luis Buñuel only ended up in Mexico because in the fifties outspoken communists like him weren't especially welcome in Hollywood, and got an even frostier reception in his native Spain, which was at the time a fascist dictatorship. The films he made in those years were mostly lightweight low-budget potboilers he didn't much care about himself, until the studio rewarded him by finally letting him make the movie he really wanted to, the truly extraordinary "Los Olvidados". Though he did manage to make one other genuinely interesting Mexican film - this one.

Although cheaper and cruder than his future Oscar-winner "The Discreet Charm of the Bourgeoisie", this film is an almost perfect mirror image of it, the difference being that in the later film a group of smug upper-class hypocrites are constantly frustrated in their attempts to have dinner together, whereas in this one, like the guests at the Mad Hatter's tea party, after the meal they're unable to leave. Why? No reason is ever given. And by the way, although supernatural forces are obviously at work, no Angel of Death ever puts in an appearance. Buñuel chose the title not because it's the slightest bit relevant, but because he couldn't think of a good one until a friend suggested "The Exterminating Angel" on the grounds that he'd go and see any film called that.

If you know the plot of "The Lord of the Flies" you'll have a pretty good idea how things will develop once these pampered snobs find themselves inexplicably unable to escape from a room with limited resources of food and an ever-worsening hygiene situation, not exactly helped by the Mexican climate and that inconvenient corpse in the closet. These supposed paragons of civilisation are soon reduced to primitive savagery, viciously squabbling over the dwindling supplies and in their desperation resorting to witchcraft, and when that doesn't work, turning on each other like a trapped animal gnawing its own leg off.

As an allegory about hypocrisy of people who consider themselves to be better than others because they have more money than most and can afford to dress elegantly and go to the opera while their servants do the actual work, it's overly simplistic, but as a weird movie it's one of the all-time classics. Buñuel's Surrealist background is much in evidence in the scenes of drug-induced delirium, crawling severed hands, and other weird details, such as the bear which just happens to be wandering around the house. And as a borderline horror movie, it brilliantly gets around its low budget by having its "monster" manifest itself not through costly special effects, but simply as an inexplicable compulsion not to step over a line on the floor. Jean-Paul Sartre's famous play "Huis Clos" has an almost identical premise of three people who can't stand each other trapped in a room they can never leave, but they're already dead and in Hell, so nothing's going to change. The protagonists in this movie, not all of whom are bad people even if they're grotesquely over-privileged, are in a much nastier predicament, because they're still alive so the worst has yet to happen. But if they can't figure something out, it soon will.

Although it's such a bizarre film, its target audience was the ordinary Mexican public, not the kind of people who only watch arthouse movies, so unlike many "weird" films it's neither pretentious nor incomprehensible, despite the total lack of explanation for what happens, which helps to make it a true classic of strange cinema. It's a pity the soundtrack is slightly defective, but when it comes to older films this rental company doesn't care which version they rent out, even if it's literally unwatchable, so I suppose we should all be thankful that the quality of this particular DVD is fairly poor rather than absolutely atrocious.