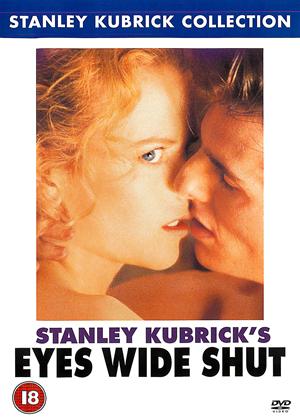 The film, adapted from a 1920s Austrian novella, is one of a kind. I don't think I've ever seen anything quite like it, although it did remind me of 'The Damned', the masterpiece by L Visconti. The atmosphere, mixing strange encounters, bizarre experiences, unsettling dreams and troubling memories, also reminded me of 'Mulholland Drive' by D Lynch. The film is about what happens when you leave your comfort zone -- the comfort of your set ideas and established relationships. Things become dangerous and unpredictable: it may be exciting, but it's also scary.

The acting is good, the characters (including the minor ones) are memorable, and the music is haunting. It is a great movie, atmospheric and disconcerting. You will think about it for days after seeing it. And there will be many unanswered questions. It all makes sense, and yet none of it does -- like life itself, presumably, in the eyes of S Kubrick who, uncannily, died a week after they had finished shooting the movie, I believe.

Director Stanley Kubrick's last film before his untimely death just after its completion. This is an adult relationship drama that dips into a gothic mystery story, it's bizarre, enthralling and a film that asks more questions than it answers. It's also essentially a Christmas time film and offers something very different than what one might expect from a yuletide movie. Tom Cruise plays rich and successful Manhattan doctor, Bill Harford. He and his beautiful wife, Alice (Nicole Kidman) along with their seven year old daughter live in a plush apartment and skirt the edges of the top echelons of the New York society. After attending their rich friend's party a few days before Christmas they have an argument during which Alice confides to Bill a sexual fantasy she once had about a man she saw on holiday. This sends Bill into a suppressed fit of jealousy which results in him having a series of sexually charged experiences in the night time city culminating in his finding out about a strange party that he manages to gain admittance to. The results of this will change his life and his relationship with Alice. Like most of Kubrick's films the narrative begs a variety of readings and this film is often thought to be a revelation about a secret 'elite' that exists and controls society. There's the obvious alluding to Freemasonry here but whatever way it's viewed it certainly goes into some surprising and somewhat weird directions. But there's also humour too and Kidman especially has never been better than she is here. This is a film that is mysterious and enigmatic but definitely a film that hooks you in and makes you want to unravel it's secrets. If you've never seen this then it's recommended.