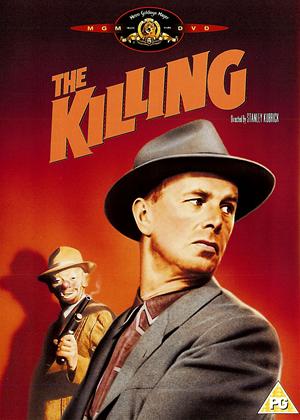 Synopsis:
When ex-con Johnny Clay (Sterling Hayden) says he has a plan to make a killing, everybody want to be in on the action. Especially when the plan is to steal $2 million in a racetrack robbery scheme in which "no one will get hurt." But despite all their careful plotting, Clay and his men have overlooked on thing: Sherry Peatty (Marie Windsor), a money-hungry, double-crossing dame who's planning to make a financial killing of her own...even if she has to wipe out Clay's entire gang to do it!
Actors:
Sterling Hayden, Coleen Gray, Vince Edwards, Jay C. Flippen, Ted de Corsia, Marie Windsor, Elisha Cook Jr., Joe Sawyer, James Edwards, Timothy Carey, Kola Kwariani, Jay Adler, Tito Vuolo, Dorothy Adams, Herbert Ellis, James Griffith, Cecil Elliott, Joe Turkel, Steve Mitchell, Mary Carroll
Directors:
Stanley Kubrick
Narrated By:
Art Gilmore
Writers:
Stanley Kubrick, Jim Thompson
Studio:
MGM
Genres:
Thrillers

Reviews (2) of The Killing

Like many classic noir films from this era, the best of which is probably "Rififi", this is the story of a robbery in three acts. One, the meticulous plan comes together. Two, it is carried out with machine-like precision. Three, it all falls apart because the robbers are not machines, but human beings who sometimes make mistakes. In this film, the "oops, bad move!" moment comes about five minutes in, so even as the robbery is planned and executed, you can see the robbers' downfall becoming more and more inevitable.

So it's not about whether they'll get away with it - in a movie made this long ago, there's exactly zero chance that they will. It's about who they are, why they do it, how they do it, and why it goes wrong. Although we get to know some of them far better than others because there are so many characters (perhaps a few too many), they're an interesting bunch. Their motives cover all shades of good, bad and indifferent, and none of the core members of the gang are truly evil. In fact, as in "Rififi", some of the supporting cast are much nastier than the actual criminals. And I particularly liked the little touch of making the hulking brute whose role is to provide a distraction with a bit of mindless violence by far the most intelligent character in the film.

It's not perfect. Kubrick is still learning his craft, and the robbery itself is a little confusing. There are also a few very clunky shots where the camera lingers for so long on something trivial or irrelevant that there might as well be a subtitle reading: "this will be important later". And the voiceover narration is actually worse than the one in "Blade Runner"! All the same, this is one of the very best of the numerous fifties noir crime thrillers.

Very exciting and worth seeing - The Killing review by MR

Very exciting, you know pretty quickly why it's going to unravel, but it is a terrific watch, and the moments when various unexpected problems turn up are clever. You notice the camera often dwells on Elisha Cook's face - think the director must have loved it, which isn't surprising, he's an intense actor, always the loser.