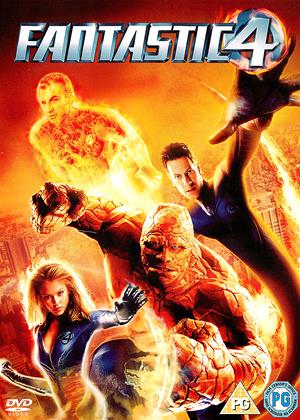 If they ever decided to make a live action Fantastic Four TV series, this would be the pilot episode, and a pretty mediocre one at that. From the incredibly dull and overly rushed story, to the second rate special effects and one dimensional characters; this whole film is just one long cliche ground out of the Marvel-Hollywood machine. If you're die hard fan of superhero films then you'll obviously want to see this, even just to see how bad it is. If you looking for a decent superhero film with a smart story and superior special effects, try 'Hellboy' instead.

Bit of a laugh - Fantastic Four review by CP Customer

This film was good fun. It wasn't pretending to be any oscar-worthy production and not being a comic-book reader, I have no idea how close to the true story it was. However, we watched it on a Monday night after a rubbish day at work and it was exactly what we needed. It's good fun, has effective special effects and good casting. Anyone who gives this film a bad review takes themselves far too seriously - it does what it says on the tin and provides light entertainment.

I must admit, I wasn't a great fan of the FF as a kid, much prefered Spidey, The X-Men and Avengers, but then again the stories published in it's heyday were a-okay soooo....

I thought well a decent job was done on DareDevil, a great job was done on the X-Men and Spiderman, as well as Blade and an okay attempt to say the least to bring the Hulk to life so on the whole Marvel have been lucky with their movies. (yes I know, Nick Fury starring the Hoff and Captain America both stank worse than a closet full of trainers but I will overlook that) So on that note I thought I'd give it a try...

And I was pleasently surprised to find a very likeable and watchable movie indeed! The dialogue resists going into the corny speech of the FF's comic books and the visuals do the team justice.

The Human Torch and the Thing are particularly well done, with great CGI for the first and teriffic prosthetics for the latter.

And the characterisations are spot on. From the romance angle between Reed and Sue and the bickering between Johnny and Ben. The story line has a few inconsistencies with the comics but then again so do the Spider Man films and the X-Men series so what the heck?

(Spider Man for instance has web shooters, a mechanical device that fires man made web, he cannot produce the web naturally in the magazines)

Doctor Doom is well handled too and the actor does not go over the top in any way. He plays the would be dictator from Latveria with a quietly simmering menace.

Set pieces are well executed, from the origin scene, to a rescue of a fire truck and it's crew and of course, the final show down.

It's well paced, takes time to develop characters and the plot which is just as well 'cause with the Silver Surfer coming in FF2, it looks like the follow up could be a roller coaster ride!

Is this Fantastic? Well not quite there are minor flaws but on the whole it's a damned good movie.

This is great to look at and the effects are very impressive - what you would expect from a comic book (sorry, graphic novel) adoption. It takes a little while to get going and there are some dull but well meaning sections but overall, it was excellent.