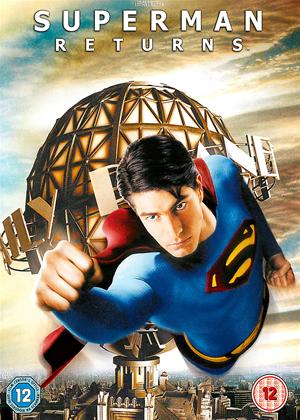 This is a good film, before its a Superman film. I'm not a superman fan, allthough I did find myself enjoying this.

Its a little far-fetched, as you would expect, but well worth the watch.

totally fantastic movie well lives upto the name superman The young boy Kal-El is renamed Clark Kent, and though he has grown up among humans,

goes on to become superman great acting and superb sets well worth watching .

This really is just more of the same, but with somebody other than Christopher Reeve. If you are a fan of the other films then you'll probably like it, although it may all feel very familiar! If you haven't seen the others then you will probably enjoy it even more. I am a big fan of Kevin Spacey but I think this is one of his least captivating roles. His performance is rather formulaic; the stereotypical Luther. I actaully think Gene Hackman did a better job as the evil megalomaniac!

So Superman zipped off on a 5 year mission to seek out..no, not new civilisations but for any signs of his home planet Krypton

In that time Lois Lane has gotten married, had a child and Lex Luthor has been able to walk away from a double life sentence as Supes didn't show up to present evidence tsk tsk!

But the man in the red cape and his underpants over his trousers (honestly would YOU critiscise him for it?) comes back and finds out that contrary to an article that Lois wrote, the world does need him, as Lex Luthor is back to his old tricks and how...

Okay so what do we have here?

Well Brendon Routh sure as hell fills the boots of the late Christopher Reeves more than adequatley.

In fact he bears more than a passing resemblence too him and his portrayal of Clark/Superman isn't an impersonation, rather it's a tribute to the man himself and it's a darned fine one as well.

Sure there are similarities but he also brings his own element too it. The new Lois is more than fine too, a sharper, more cynical attitude (and perhaps you understand why as well) and a perfect foil for Brendan.

And finally Gene Hackman as Lex is gone to be replaced by Kevin Spacey who clearly relishes the role but does not go hammy or over the top but plays the part well with the just the right mixture of comedy and a hint of danger that tells you that this man is a sandwhich short of a picnic despite being a genius.

Yes Superman is back. Settle back and enjoy the ride. I am waiting now for the sequel.

Not quite super man.. - Superman Returns review by CP Customer

Very hard to follow in the foot steps of greatness.. It's a valient attempt to continue the superman saga.

Kevin Spacey is excellent as Lex Luther, a far better villian than the original series. Shame the other cast couldn't quite match the quality of the originals.

Loyal to the past, though a bit boring. - Superman Returns review by CP Customer

You have to give Bryan Singer some real credit, he treats the Superman franchise with huge respect paying real homage to the Christopher Reeve films of the 70's & 80's. But for me this new Superman never quite works, Brandon Routh wasn't that good, he's a bit too handsome and sadly lacked the geeky awkwardness of Reeve's Clark Kent, and Kevin Spacey as Lex Luthor was really quite poor. Though it's a competent remake I personally still prefer the Christopher Reeve Superman movies.