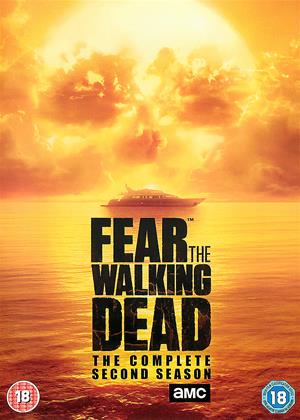 Rent other films like Fear the Walking Dead: Series 2

Fear the Walking Dead: Series 2 is an ambitious look at how civilization handles apocalyptic circumstances as a whole, as opposed to its more famous iteration where everything was presented through the vantage point of few survivors closely gathered together in a tribe-like community. The second season takes its time to develop upon secondary characters, as well as expand traits of familiar ones also; it’s a continuation well-worth your hard-earned time.

This season follows Madison Clark, as she leads herself to safety and ends up on a boat where a mysterious stranger named Strand (played by Colman Domingo) dwells. Meanwhile, several zombies, walkers, you name it: emerge from the watery depths to cause all kinds of problems to the protagonists. Then a question arises: maybe walkers can be swimmers also?

The boat then proceeds to safety and washes ashore near a Mexican compound where the bunch takes refuge. The compound is owned by a guy (played by Dougray Scott) who was previously romantically involved with Strand and in a sense: a conflict brews underneath the surface between the past two lovers.

It doesn’t take long for things to go south however and the compound gets infested with walkers seemingly out of nowhere, forcing the group yet again to flee their established safe haven (if any place can be called as such during destructive events of global proportions). This concludes the first half of the second season.

The second half sees the group splitting up their ranks: Alicia, Madison and Strand stumble upon a hotel full of walkers; Nick gets involved with a cult; and Travis goes to search for his lost son Chris. As the group split their forces, the narrative jumps between the whole three – always leaving you wanting more (in filmmaking terms: ‘meanwhile, back at the ranch’). The pacing is fine, while camera work is exceptional.

Fear the Walking Dead: Series 2 packs everything its predecessor had, plus more. It takes its time to further expand upon certain aspects of familiar characters, during which it also sheds light on newer tropes and settings that, if not else, deepen the mystery even further. And to say there is mystery in the second season, it to acknowledge the show’s potential without precedence.

For those in search of thrills, terror and gore - you’ve come to the right place my friends. Fear the Walking Dead: Series 2, while stumbling at times with its writing, is clearly a step forward to the right direction for the franchise.

Ultimately, the second season packs enough explosiveness (both figuratively and literally) to set ablaze the imagination of everyone it comes in contact with, deeply and permanently.