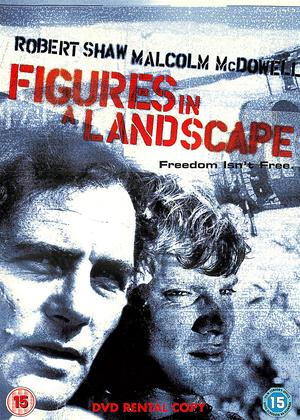 Reviews (1) of Figures in a Landscape

This film is utterly baffling in a very early seventies kind of way. Apart from a few shouts and some untranslated Spanish background chatter, only the two main characters ever speak, and although we learn quite a bit about things they got up to back in England, the women in their lives, and other totally irrelevant people and events we never see, they never get around to explaining what the hell's going on.

At the start of the movie, two men are running for their lives across what appears to be an arid and sparsely populated region of Spain, relentlessly pursued by a sinister yet somewhat undersized black helicopter whose pilot we never get a good look at. Who are they? Escaped convicts? Fugitive prisoners of war? They've obviously escaped from somewhere, because, somewhat improbably, their hands are tied behind their backs, but we never find out what these two Englishmen are doing in Spain, where they escaped from, or any other relevant bits of backstory (presumably it's all explained in the obscure novel the movie is based on, which I've never even seen a copy of, let alone read). It appears later in the film that the action is taking place in a near-future fascist dystopia, and we see some slightly oddly-dressed soldiers from no identifiable country, so maybe this isn't Spain after all, in which case we have literally lost the plot.

Robert Shaw is one of those actors who were huge back in the day but are now almost forgotten. Which is a pity, because he was a fine character actor who was equally likely to play a good tough guy in "Jaws", a bad tough guy in "The Taking Of Pelham 123", and somebody who was none of those things in the screen version of Harold Pinter's play "The Birthday Party". Here he's an amoral tough guy who seems to owe a great deal to Eli Wallach's magnificently horrible Tuco in "The Good, The Bad And The Ugly". Unfortunately, although his performance is mostly very good and at times he nearly manages to channel Tuco's gleefully anarchic spirit, no amount of good acting can salvage a lousy script. The often horribly stilted dialogue does him no favors at all, and he loses our sympathy by doing something utterly inexcusable only a few minutes into the film. Also, his peculiar habit of automatically doing the exact opposite of whatever his much more intelligent companion recommends, even though he himself admits that this is extremely stupid, turns him into not so much a character as a cardboard cutout symbolically representing instinct versus reason with a running gag tacked on.

Malcolm McDowell is oddly subdued, probably because he realizes that he's the second-best actor playing the second-most-interesting character in a film which for all practical purposes only has two people in it, but basically he's an older version of Michael Travers from "If...", so maybe he was in a terrible foreign prison run by fascists as a punishment for his actions at the end of that film? Or maybe not, since his character in this movie is called Ansell. Whatever. Since we don't have a clue what's really supposed to be going on, anything's possible.

The film is uncategorisable because it resembles a stark, minimalist Samuel Beckett play with two thinly-sketched protagonists swapping existentialist banter which for some reason has been turned into an action thriller by replacing the stage with an entire country, and throwing in firefights, explosions and helicopter attacks at random intervals. I'm giving it one star each for Robert Shaw's performance, and because it dared to be different. I'm not giving it any more because it's different in a way that doesn't work.