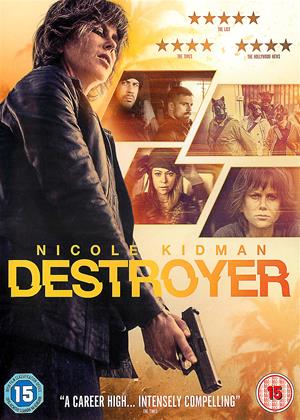 Over acting ! - Destroyer review by AB

Sorry but i was really looking forward to this film . Nicole Kidman is not my favorite actor but usually in good films .. This was not a good film . Nicole seems to whisper her way through the film , if wasn't for the other characters i would of turned the film off. Not me I'm afraid .

As is usual with me, I knew nothing about this film what so ever apart from it has Nicole Kidman in it.

I'm a big fan of Nicole's recent work she's in a ton of strange films playing some weird and wonderful characters and this is no different.

There is a certain realism to this film that is very refreshing, no elaborate glorified gun battles or fight scenes, people getting tired when running and people looking dog rough, good to see.

A slow burn film but kept my interest through out. Great acting as well as an interesting story. Not a must see film by any means but a good film worth a watch.

Wonderful, someone has actually employed decent script writers for a change; has assumed the audience has more than the attention span of a goldfish and can cope with a cleverly revealed, non linear narrative; has not used shaky cam, hyperkinetic cutting nor cgi and has hired good actors to bring the characters to life. In the current days of Marvel and Disney I had almost given up hope. A proper film for adults. Well done.

A film so flamboyantly bad that at times I found myself laughing. The direction is hackneyed and the script veers between the banal and the preposterous - there's barely a cliché of the genre that doesn't get an airing here. That said, a more subtle actor than Nicole Kidman might have made something of this low-grade material. Her performance here, however, is ridiculously histrionic. Instead of plausible characterisation, we're presented with an impersonation that's nearly all surface: but dead eyes, greasy hair, wrecked complexion, shambling gait and near-catatonic mumbling are not enough. The rawness that some reviewers have praised in this film I found to be wholly bogus. Kidman is at her best, I think, playing characters for whom life itself is a performance - as in To Die For, for example. Here, the relentless self-consciousness makes the character profoundly unbelievable.

Dull turgid and too long - Destroyer review by cr

I think my review follows some of the others already on here. Awful film long grim slow depressing. Constant close ups of Nicole's face soon start to bore. The plot is not likely and drags on and on. Nicole is ok in it but a film needs more than good acting. All of the characters are ugly and unsympathetic. Avoid.

Positive reviews of this film have focussed on Nicole Kidman’s “brave” performance as a downbeat detective in search of a murderer. Why brave? Because she wears no make-up. Wow! What an actress will do for her art! But focussing on her sullen face as she sits in her car and stares into space soon palls. The plot is painfully slow and is stalled even further by numerous flashbacks to a connected case 18 years ago (always a sign there’s something wrong with the script).

The title makes it sound as though Nicole’s going around on a vengeful killing spree, but instead we get a series of conversational vignettes with passing characters. There’s even a cliché of a subplot with her stroppy teenage daughter, which is best fast-forwarded. The narrative is so badly structured that the flashbacks build to a bank heist whose outcome we already know. The ending in the present is an even worse damp squib, deliberately devoid of thrills. Halfway through, there’s a well-shot bank heist that shows what the film could have been, otherwise it’s a long 2hr haul.

So so film noir in Colour - Destroyer review by RW

I would actually give it 2 and a half stars as I don't not like it but don't exactly like it either. There is a lot a good stuff in this film, it follows the film noir themes nicely and the plot slowly revealing itself is actually quite good. Alas Nicole Kidman spoilt this one for me, a wig and some ugly make-up do not make a convincing burnt out cop, some effort in acting would have helped.

Not a great film - Destroyer review by DM

I had heard a little about this film, such that Nicole Kidman was in it, and that she put in a good performance.

Well I found it really slow going, almost to the point of boredom, but I thought see it through to the end, it may improve.

It did'nt, yes Nicole does put in a fine performance as a drunk detective, but the storyline was quite silly.

I don't wish to put people off watching it, we can all have our opinions, but for me this film just did not spark.

Disappointing thriller, I expected more as I always rate Kidman and am a sucker for bent cop films. This was turgid and depressing . No one to root for. Denzel Washington’s extraordinary performance in Training Day saved that film, unfortunately Nicole wasn’t strong enough to turn this around

The actual story line wasn't bad but the execution of it was awful. Slow, boring, painful to watch at times.

There are at least a dozen moments within Destroyer where it’s astounding to just watch Nicole Kidman inhabit the role of an aged, damaged, and drifting detective. Her first scene features her staggering out of a car and stumbling her way into a crime scene. Miles are on her face and there’s a lethargic gaze in her face where every step feels like a chore. She’s a weary cop who thankfully turns in an amazing performance within a rather standard crime thriller.

Kidman plays LAPD detective Erin Bell, currently trying to track down a gang specializing in heists and murder. Her past is coming back to haunt her as she recalls a time when she more lucid, working undercover within a gang. As she tries to bust this latest batch of criminals committed to a heist, she’s reminded of how much her previous case damaged. Not just physically, made apparent by her much different face after being involved with a crime gone awry, but mentally when she realizes how easy it would be for someone younger to go down the same route that led to her darker life.

The case proceeds down the familiar route of one badass cop trying to defy the odds and rules to crack a case, albeit with an interesting edge of having Kidman in a role usually reserved for men. It’s rare to see an aged and grizzled female cop going out of her way to track down criminals. Perhaps one of the best moments features her visiting a power player played by Bradley Whitford to get some info out of him. When he refuses and she’s escorted out of his mansion, she proceeds to beat up his bodyguard and hold him at gunpoint in front of his kid.

The film goes about its story Erin Bell nonlinearly, cutting between her con days and tough cop days. This breaking up of the story helps to make the story more engaging to decipher considering there isn’t a whole lot present here that hasn’t delivered before in hardboiled tales of tough-as-nails cops. Erin’s early days are seen through a haze of layabouts who waste away their days talking about the corrupt government, playing video games and drinking beer. We don’t linger too long on these scenes and I’m all the more thankful considering how easily they can slip into 1960s slang revolution babble. The last thing I want to do with a film like this is question the era based on the street talk.

Destroyer is a film that is so flimsy with its writing that Kidman all but owns this film. She’s the best thing in it, she’s the most entertaining aspect, and she’s the only reason to ever see a film that borrows so liberally from a lot of tough cop movies.