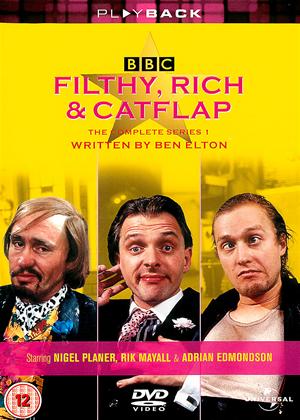 Synopsis:
Conceived by Rik Mayall and Ben Elton as a natural successor to 'The Young Ones', 'Filthy, Rich and Catflap' is a difficult series to describe. The words sublime and ridiculous do spring to mind, but the word that probably sums it up best is: funny. Filthy, Rich & Catflap is a tale of Richie Rich, talentless and unheard of television personality along with Ralph Filthy, his useless, sponging agent and Eddie Catflap, his alcoholic minder, who are both involved in helping (hindering) Richie's quest for TV fame and glory. Unfortunately, Filthy never gets him any work, and his minder Eddie is more than willing to help administer extreme physical violence should any be visited upon his boss.
So, probably not the most stable basis from which to launch a career in television. Filthy, Rich and Catflap's legacy lasted for years however, in the form of the brilliantly funny, if just a little more violent, Bottom.
Actors:
Adrian Edmondson, Rik Mayall, Nigel Planer, Michael Redfern, Barbara Windsor, Rupert Bates, Arthur Smith, Lee Cornes, Johanna Hargreaves, Ceri Jackson, Steve Kelly, Helen Lederer, Nick Maloney, Chris Barrie, Harry Enfield, Stephen Fry, Hugh Laurie, Ann Queensberry, Glen McLaughlin, Damaris Hayman
Directors:
Ed Bye, Paul Jackson
Producers:
Paul Jackson
Writers:
Ben Elton, Rik Mayall
Studio:
Universal Pictures
Genres:
British TV, TV Comedies
Countries:
UK

Rent other films like Filthy, Rich and Catflap: The Complete Series

Reviews (1) of Filthy, Rich and Catflap: The Complete Series

First there was "The Young Ones", and pretty much everyone agreed that it was hilarious. It certainly made stars out of its main cast members, with the exception of Christopher Ryan, very much the Ringo of the quartet. After two series, having run out of ideas, the creative team pulled the plug. Then, a few years later, exactly the same people (minus Christopher Ryan) made "Filthy, Rich and Catflap", a sitcom about not dissimilar but somewhat older men behaving equally badly. It lasted for one series, sank without trace, and was sort-of resurrected as "Bottom", now minus Nigel Planer (but with Christopher Ryan, sometimes), which ran for three series and multiple stage-shows, and fully established the adversarial relationship between the fictional alter egos of Rik Mayall and Adrian Edmondson.

So - same creative team, same type of humor, pretty much the same characters. Why, out of these three shows, is "Filthy, Rich and Catflap" the one that didn't work and is almost entirely forgotten? Perhaps because it's a missing link like the poor old archaeopteryx, a feathered lizard that had to exist in order for birds to come about, but probably couldn't fly worth a damn.

The full-on Mayall/Endmondson ultra-violent relationship hasn't fully evolved yet; there's the odd bit of "Bottom"-style mayhem, such as Mayall getting an axe embedded in his groin, but it's mostly verbal bickering, and seems oddly lackluster. The constant showbiz slang, which basically amounts to leaving the ends off words, isn't funny at all, but is very frequently used in place of proper jokes. And some of those jokes are both poor and repetitive. For instance, every single time the doorbell rings throughout the series, which is often, because it supposedly sounds like a fart (though in fact it doesn't), everybody fans their nose, including the person who rang it. How we laughed!

The political and social humor is leaden in the extreme; they might as well have held up a placard every 10 minutes saying: "The police are fascists, the Tories are Nazis, and we hate Thatcher" - it's about as funny as the satire we're treated to. Ralph Filthy, the revolting, unashamedly degenerate theatrical agent played by Nigel Planer, is potentially the most interesting of the three, but, despite getting top billing, is on screen much less than the other two, implying that Planer was juggling two jobs and was only there half the time. And trying to lampshade abysmal jokes by having the characters repeatedly turn to the camera and admit the show isn't funny doesn't make it so. Still, if you love "Bottom" so much that you think you'd enjoy a (if you'll pardon the expression) half-assed version of it, you might get something out of this. And it does provide an early bit of proof that, if you catch him in a good mood, Stephen Fry will agree to be in absolutely anything before reading the script.