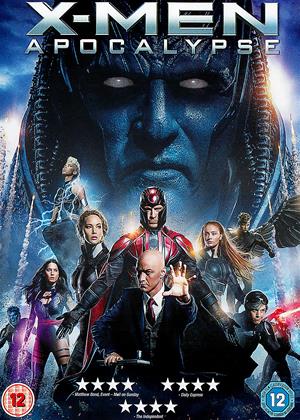 Give it a miss this time! - X-Men: Apocalypse review by CS

Right from the start you can see that something is missing, with it's Ancient Egyptian introduction this feels more like a 'Curse of the Mummy' film, than an X-Men movie! Then we're off on a really mixed up, muddled, slash fest which feels less like an X-Men movie and more like a lame horror movie with cliches aplenty! The timeline for characters is all mixed up and nothing flows from previous films, characters that are introduced in a later time line are re-introduced earlier on and as a result, this just becomes a mess! The storyline is so weak, direction is all over the place and the actors never really get a chance to develop their characters, in the end it all becomes very confusing, dull and uninteresting. This has got to be the worst of the entire franchise and doesn't really do anything for the series or future outings. It simply feels like someone filmed and whole load of unrelated scenes then very badly edited them together, I'm not sure they even boater to write a script, it really is that bad!

It's very very hard not to think of Stargate (The Movie) and SG-1 (the series) for the first hour. But for the fan of the original X-Men, it's quite pleasant. No Colossus, but at least we get a better Phoenix than in the first movies.

There’s a moment in X-Men: Apocalypse that makes a not-so-subtle jab at X-Men: The Last Stand, considered one of the worst movies in the franchise. A group of X-Men leave a movie theater discussing Star Wars. One character remarks that they can all agree on the third movie being the worst in the series. You might not want to make such a jab, Singer, about third movies being the worst in trilogies. You’re making one with X-Men: Apocalypse being the third in your new X-Men trilogy and it is indeed the worst of those movies.

Yes, it pains me to say that Singer’s latest X-Men picture has another case of sequelitis. The symptoms are easy enough to spot: too many characters, too many plots and not enough time to make any of it stick (even at 2½ hours). What was once a well-coordinated balancing act of mutants, xenophobia and political tensions of eras has stepped down into typical superhero shlock.

The biggest flaw lies within the titular villain, Apocalypse (Oscar Isaac). Dubbed the first mutant, his reign of power began in the BC era when he used his mutant absorbing/enhancing abilities to be labeled as a god. But when his human slaves betray him, the legendary mutant is sealed away in his tomb. When he’s unearthed in 1983, he resumes his plans to control the Earth as its sole ruler. His plans seem intricate in their numbers, but simplistic in their execution. He needs four mutants to act as his horsemen of the apocalypse who all seem to join him without much effort. He needs to build some pyramids for himself in Egypt even though there are already a few - he just wanted some bigger ones, I suppose. And he needs to place his soul into another mutant body despite his current one appearing to hold up for thousands of years in captivity by some curse or whatever. Oh, and he also wants to control humans and mutants on Earth with telepathic powers. He probably wants a decent meal at some point with all these demands for taking over of the world.

And that’s just the Apocalypse arc as there are at least eight other plot lines going. We have an aged Magneto (Michael Fassbender) attempting to adapt to human life with his own family, but still experiences tragedy wherever he tries to live. Charles Xavier (James McAvoy) is minding his school for gifted young mutants, but is still missing that CIA agent he fell in love with in X-Men: First Class. Remember her? I don’t. Quicksilver has to come to terms with Magneto being his dad. Mystique needs to own up to being an inspiration to young mutants. Storm wants to be a true hero. Archangel wants revenge on Nightcrawler for their cage match. Beast attempts to find a reason why the X-Men need a jet. Cyclops attempts to cope with his powers and being different. Jean Grey grapples with her ability to control her powers and unleash the dark powers of the Phoenix. Is that not enough plotlines for you? Don’t worry - there are still a few characters who show up to just spout a few lines and then do nothing until an action scene. Or just do nothing at all.

With so much crammed into this script, it’s entirely lacking in the emotional resonance of previous X-Men movies. We never get to see the full extent of Magneto’s loss of faith because Apocalypse is too busy making him a costume and giving him the ability to lift cities. We never get to see much of a mountain for the younger mutants of Cyclops or Nightcrawler to conquer because we need to see them use their powers in as many scenes as possible. Most importantly, we never get a sense of a new X-Men team being formed as the movie is in such a rush to come full circle with all of them. I could almost see the Fox executive off to the side making the wrap-it-up motion with his hands to make sure Xavier is bald and that all the X-Men have their iconic suits.

But what really sunk this movie for me was the tone. As the other movies had a clear balance of darkness and humor, X-Men: Apocalypse is all over the place as it can’t decide which mood works where. There’s an amusing Quicksilver segment where he saves an entire building of people, but it’s a sequence that follows right after the tragic death of a character. Magneto finds himself ready to murder a room of people with his bitter rage, but it’s temporarily halted when Apocalypse enters the room for an inappropriate, beat-punctuating curse word. Wolverine, in a very tacked on scene, is let loose inside a government facility to murder soldiers in a scene that is better suited for a horror movie.

An even bigger crime is the lack of identity for this movie. First Class and Days of Future Past felt as though they existed within the 1960s and 1970s. For Apocalypse being set in 1983, this didn’t feel like the 1980s, even with its minor references to Star Wars and Michael Jackson. Perhaps it’s also because I didn’t buy the theme of the decade which should have been about greed and fear of doomsday - an aspect that is sadly never touched upon.

Why am I being so hard on this movie though? It has its fun and comic booky moments of action and comedy. What more should I expect from a summer superhero movie? The problem is that X-Men has done so well separating itself from the superhero pack that it’s depressing to watch it join the fray. X-Men: Days of Future Past ended with a climax of character, intelligence and a telling message about security and destiny. X-Men: Apocalypse ends with all the heroes using their powers to make sure a bad man who wants to build pyramids explodes. This isn’t exactly typical for the series or a step up either.

I fear the X-Men franchise has reached its next stopping point - the point where it can go no further and must retreat back into comic book solitude. It will not leave so much in flames as it did with X-Men: The Last Stand, but Apocalypse is so battered and unfocused that another addition at this point would be a tremendous disaster. My hope is that this will be the final X-Men movie before another director tackles it with his original vision. It seems implied the way Singer finally saddles the X-Men in their iconic and somewhat ridiculous costumes from the comic books.