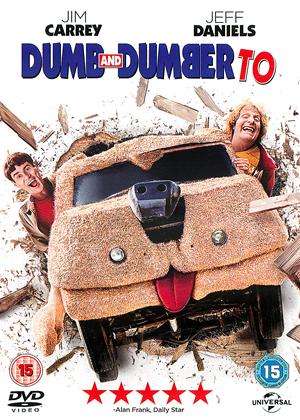 Reviews (1) of Dumb and Dumber To

Tried not to laugh ??… but couldn't help myself - Dumb and Dumber To review by TJ

Ok this is not me type of film… adults behaving like immature teenages usually not my idea of comedy… so I was forced to watch it by my beloved partner… well I tried not to laugh ??, but I couldn't help myself… very funny ?? in a very stupid take out your brain and give it the evening off type of way.

Dumb and Dumber To review by Mark McPherson - Cinema Paradiso

In 1994, Jim Carrey and Jeff Daniels entrusted their comedic talents in Dumb and Dumber, written and directed by a young Peter and Bobby Farrelly. The two actors played an idiotic pair of fools in a mixed icon of 90’s comedy. 20 years later, both parties have returned for Dumb and Dumber To, a sequel that plays more as a retread than a revisit. It’s the same old jokes, same old script and same old characters. Some nostalgia required, laughs sold separately.

Lloyd Christmas (Jim Carrey) sets the tone by finally awaking from a catatonic state he’d been faking for twenty years simply so he could prank his best pal Harry (Jeff Daniels). Clearly their brand of humor has not been diminished. The two go on a search for a new kidney for Harry, but end up discovering from lost mail that Harry had a child he didn’t know about. On the road once again, they track down her adoption parent who happens to be a famous scientist. Feeling ill, the old man sent her to a TED-like symposium to deliver his presentation, but forgot to send along his experiment. Harry and Lloyd, ever the eager beavers, take on the task of delivering the package to her at the conference. But there are some evil men who want both the scientist dead and his experiment in their greedy hands.

If all this is sounding familiar it’s because this is a script that mimics the exact same setup of the first film. It even hits all the same beats with establishing a love for Lloyd, a dream dashed for Harry, a naive young woman and a bumbling group of baddies mistaking the duo’s ignorance for expert murder tactics. You would think that the whole daughter angle would provide a unique twist to the story, but it ultimately ends up being a wasted bit of potential. The conclusion turns out to be a prank on the audience where I half-expected Harry and Lloyd to laugh at the audience since they laugh at every opportune moment of mockery.

I’m not too sure why the Farrelly brothers felt the need to dig up these characters again especially since they clearly don’t have any new ideas for them. After 20 years, I couldn’t help but stare in astonishment at how these actors have reached this age and reprise such roles. At ages 52 and 59, Carrey and Daniels are far too old for these goofy haircuts and slacker clothes. It just baffles me that not once does a single person make a comment that these two are far too old to be playing childish games, making armpit noises or discussing poop. Was everyone just blind to the mountain of wrinkles coating Carrey’s face? Everything about this script feels as though it were written for a sequel that should’ve been shot a decade ago (or maybe never).

And it's not that I want to hate the low-brow antics of the returning duo. To be honest, there's a slight charm to their childish ignorance and there are maybe one or two decent jokes that will catch you off guard. The problem is that the natural grace of the actors for this material is gone. They don't feel like they're in their own element here as if the old suits don't quite fit after all these years. With a storyline attempting to send the two back together for another trip down memory lane in their dog-themed car, the comedy is more forced and sad for what could have been a very clever concept of a film.

Dumb and Dumber To is one letter short of a title and one script short of a comedy. The years have not been kind to this brand of humor. And with no new or clever gags running this engine, it's a lumbering dinosaur of a comedy. If you’re familiar with the previous film, the movie is a dull repeat of the same old bit. If you’re too young to remember or never watched the original, the movie is a crudely juvenile attempt at a road trip movie which runs out of steam fast. I thought the Dumb and Dumber franchise was officially dead and buried with the lackluster prequel film Dumb and Dumberer, but apparently the corpse had to be dug up and propped for puppetry one last time. I sincerely hope this is the last time as another movie with a 60-year-old pair of dunces putting on the Beavis & Butthead act will be far more depressing than its intended goofy nature.