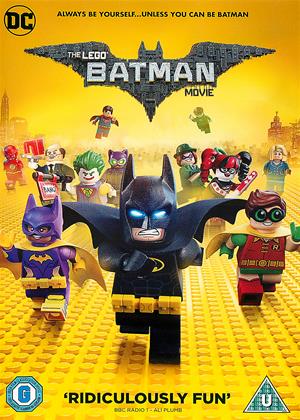 Reviews (1) of The Lego Batman Movie

This is not a kids' film - almost at any level. All the jokes and reference and themes are adult and most of the humor is ironic. If you are an adult you will not be disappointed. If you loved the first film then this one is better although it has to be because the first one was so fresh and new. As a Xmas option I'd say it works with the under 12's but their attention is being held by the bright colours and the acceptable story rather than the constant stream of knowing gags and backstory.

Be warned you will laugh out loud - don't be ashamed about it.

Right off the bat (pun intended), the main issue with these kinds of films and big franchises is they’re spread too thinly across a number of platforms and different takes that they start to lose their essence after a certain number of these products are being done. Of course, I’m referring to big franchises such as the DCU, Marvel Cinematic Universe, Hello Kitty, The Emoji Movie, and others. So here, producers are pairing with giant toymaker Lego to lego-tize everything in existence, which doesn’t always translate as well on the big screen. Which leads us to our second main issue that’s often plaguing said franchises: a deliberate Americanization because of market and demographic data which immediately disenfranchises the rest of the world.

Case-in-point, this Americanization doesn’t have anything in common with the American culture, but rather its appeal can be found grazing across a superficial (and oftentimes non-existent) pop-culture craze that usually dissipates after a little while in thin air. These little sparkles of deliberately superficial discourses are found in the way these characters talk, act, refer to certain pop-culture phenomenon, and make intra-jokes which quickly lose their context year or two after the films are being released. Alas, that is the self-fulfilling prophecy of something that doesn’t hold any inherent value (or artistic merit), but is only made as a cash-grab and a giant commercial about lifeless toys.

Which naturally leads us to The Lego Batman Movie. This film is directed by Chris McKay, and stars Will Arnett as the quintessential vigilante Batman, Michael Cera voicing his sidekick Robin, Rosario Dawson as Batgirl, Ralph Fiennes portraying the always-wise butler Alfred Pennyworth, and for some reason comedic and improv genius Conan O'Brien as The Riddler (movie highlight). In it, the titular character Batman pairs with his rag-tag team of sidekicks and other misfits who try to take down his arch-nemesis Joker by compromising their quirky personalities into a cohesive whole. That’s the power of teamwork, or so we’re told. From here thereon, events play and unravel in quite a spectacular fashion which would probably satisfy the youngest audiences and annoy the hell out of their parents at the same time.

The animation, a synergistic mix between stop-motion and CGI, is as seamless as it could possibly be and to this extent the film ticks all the boxes and then some. The real trouble lies within the characters’ mannerisms, discourses and the way their dialogs play out. In fact, once it gets apparent that these figures populate the pop-cultural world of the States, The Lego Batman Movie quickly loses its grip and fumbles at its feet (as witnessed by the shoehorning of different franchise characters into the Legoverse, such as Sauron and Voldemort). And therein lays the problem with these kinds of things: films like The Lego Ninjago and The Lego Batman will get quickly outdated, while classics such as The Lion King, Aladdin, or even The Incredibles will have monuments erected and songs shall be sung in their name. Okay, maybe an itsy-bitsy exaggeration, but still you get my point.