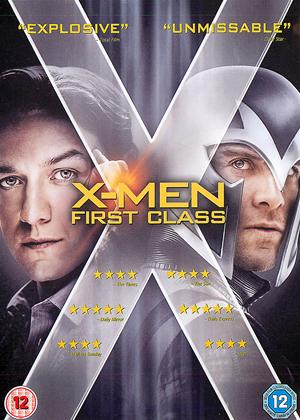 The storyline revolves around the 1960's at the time of the Cuban Missile Crisis and the bad mutants manipulation of the situation to create a rift between mutants and 'humans'. Unfortunately this does not prove to be the most provoking of story lines and takes time to get going.

I expected good things from this film as I have enjoyed the previous X-Men films and thought that this had potential. However, not much happened and it felt twice as long as it was.

In early June, comic book fans will be blessed with yet another X-Men film. X-Men: First Class will be a prequel to the X-Men films that are currently out there. Directed by Matthew Vaughn who blasted onto the scene with the excellent British film Layer Cake, the film tells the origin story of how Erik Lehnsherr and Professor Charles Xavier met up and how the superhero group, the X-Men came into being.

Aside from those two brilliant actors who take the lead, you’ll also find the following: Jennifer Lawrence as Mystique, Rose Byrne as Dr. Moira MacTaggert, January Jones as Emma Frost, Kevin Bacon as Sebastian Shaw, Nicholas Hoult as Hank McCoy/Beast and Oliver Platt as The Man In Black.

Each new trailer and new photo seem to increase the excitement. What started out as an ill-informed and directionless project, has morphed into was is sure to be one of the biggest blockbusters of this summer.

One unique to comic book movies aspect that this film seems to convey through its trailers is the “villain” of the film. There is no doubt that there will be mutant-on-mutant action, but it seems the primary goal of the film is real-world scenarios; as seen in the trailer where it appears the X-Men are assisting the United States in the Cold War. There are still inklings of threats discussed throughout the original films that concern themselves with mutant’s acceptance into a bigoted society.

There are already several mutants set to appear in the film (even more than have been listed above), yet producers still say that the film will contain a secret cameo of a character. Wolverine has been suggested as said cameo, but producers have shot it down. Stan Lee is a given cameo as he always is in an Marvel movie, so it remains to be seen who the cameo will be.