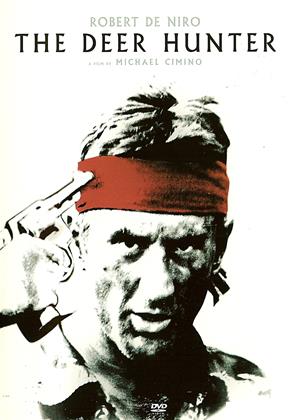 Reviews (2) of The Deer Hunter

The US action in Vietnam was long and bloody, and when you consider that over 3 million Americans served in the war, that over 58,000 servicemen died not to mention all the casualties, and that an estimated 4 million Vietnamese (on both sides) lost their lives during the conflict perhaps it's not surprising that there are so many films dealing with the war. It touched the whole of US society - and one small section of that society is the subject of this film.

It follows the lives of a group of friends who work together in a steelworks in a small town in Pennsylvania. After work they drink beer together, at weekends they go hunting together, they know each other's families, wives, girlfriends, go to the same church (Russian Orthodox - they are from eastern European stock), they quarrel over small things - they're just normal working class guys. They are part of their community.

And then they serve in Vietnam - and their lives change forever. Michael (Robert de Niro), Nicky (Christopher Walken) and Steven (John Savage) are taken prisoner by the Viet Cong and are forced to play Russian Roulette while their guards bet on the outcome. They escape, but Steven's legs are broken. The war continues, they go their separate ways, the war ends, they return home to rebuild their lives - if they can. Michael finds that Steven is hospitalised, disabled and confined to a wheelchair. Someone sends him money regularly from Saigon. Michael goes to Saigon, tracks down Nicky who has remained there, traumatised and mentally disturbed by the war and - horrifyingly - still playing Russian Roulette.

I found this film to be quite extraordinarily moving. It isn't really about the Vietnam war - it could be any war - and in fact the war scenes form only a small part of the film. It is about the aftermath of war and how it affects those involved, both the soldiers and their wives/girlfriends, and how those effects will last for the rest of their lives. There are arguments about how realistic the story about Russian Roulette is, about the hunting scenes, the use of non-Pennsylvania locations etc. But this is a powerful film and the performances by de Niro, Meryl Streep and particularly by Christopher Walken are superb. This was also the last film made by the always excellent John Cazale.

Highly recommended - 5/5 stars. [Aside: There are very many films about the Vietnam war - for an extensive list search on Wikipedia for "vietnam war in film"]

This war drama remains a powerful and quite astonishing condemnation of war and whilst it still has its dissenters it is a real achievement. When it was made American cinema still hadn't really got to grips with the Vietnam war and this film looked at how it affected the young men drafted to fight there and also the people at home who are equally traumatised by the conflict's resulting destruction of their lives. This is not a traditional genre war film and there are in fact very few scenes of actual combat. When the story moves to Vietnam it is a somewhat disjointed and jarring scene change that moves very quickly to the infamous POW scenes. Controversial to this day the 'Russian roulette' segments that form a key part of the narrative remain very shocking and these go along way to highlighting the exceptional acting that is carried throughout the film by the cast. It's the story of a group of friends from a grimy Pennsylvania steel mill town whose lives are radically altered by the experience of three of them who are drafted to fight in Vietnam. With the opening scenes of a huge wedding to the final chapter of attempting to find one of the three who is missing in Saigon this is a poignant, moving and a very intense and provocative drama. It is a masterwork and deserved the multiple awards it garnered. The cast are all superb including Robert De Niro, Christopher Walken, John Savage and Meryl Streep, it's also the final film of John Cazale who died before the film was completed. Critics have cited the racist depictions of Asians and one can read a homosocial subtext especially relating to soldiers assimilating back into civilian life with the clear feminine influence at play but whichever way this is viewed it's an American 'anti-classic' and a film everyone should see at least once.