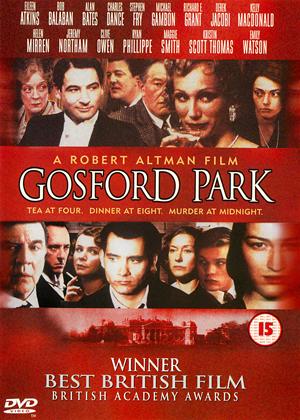 I loved this film and was utterly engrossed from start to finish. How can you beat a star-studded cast, happy to take supporting roles, just to have the opportunity to work with director, Robert Altman? Throughout the film we see the difference in lifestyle betwen the aristocratic family and their friends above stairs and the busy servant world downstairs. If we ever climb the stairs to visit the sumptuous world above, there is always a servant's eye watching somewhere and any gossip is quickly relayed on their return downstairs. This is a perfect murder-mystery movie that I would definitely recommend to anyone! Wonderful performances especially come from Maggie Smith and Emily Watson.

With such an exceptional British cast I thought this cannot go wrong but although the acting was superb and Altman captured the 'business' of the servants, the film lacked a focus until a murder was finally revealed. I found the characters did what they could with the script but no real warmth developed between them and I felt it lacked an emotional impact, which coupled with an aimless storyline, the film was almost about nothing but the daily lives of those 'upstairs' and those 'downstairs'. Could have been much, much more!

Interesting and pleasantly meandering film. Main problem was inaudibility. Many lines were thrown away as passing comments with the actors turned partly away from the audience, except of course for Clive Owen and Kristin Scott-Thomas.

A bit like 'Downton Abbey', but racier and more exciting: an excellent film - Gosford Park review by Philip in Paradiso

In late1932, very wealthy English industrialist Sir William McCordle and his wife, Lady Sylvia, host a weekend shooting party. The film takes place, therefore, at their country estate, Gosford Park. What follows is an unforgiving depiction of the British upper-class a few years before WWII. There is, of course, a strong element of 'upstairs/ downstairs'; there is also the amusing contrast between the English aristocrats and the American guest(s). There follows a murder, and a police investigation.

The movie has been described as "a satirical black comedy mystery film" (Wikipedia entry). I would say there is an element of satire, but it is not a comedy, or even a black comedy, in my opinion. It is a critical and sarcastic description of a certain, entitled social milieu, in the twilight of Empire, which would be gone (in that kind of setting) 20 years later, as one of the servants rightly predicts. There is humour in the film, no doubt, and there is an element of mystery (to do with the murder that is committed), but that is not the central purpose of the film, in my view.

The movie is a bit like a sexy, raunchy, far more daring and harsher version of 'Downton Abbey': the aristocrats are not all nice and polite, far from it; the servants are not all well-behaved, far from it; and there is quite a bit of hanky-panky, also across the class divide! So, 'Gosford Park' is a better and, probably, more realistic version of 'Downton Abbey', as it were.

Overall, it is an excellent film and a must-see, in my opinion. The only thing that I found disappointing was the ending. I cannot go into details so as not to spoil the story, but the elucidation of the murder is not entirely plausible and is a bit contrived. With a better, more convincing, sharper ending, the movie would have been a complete masterpiece.