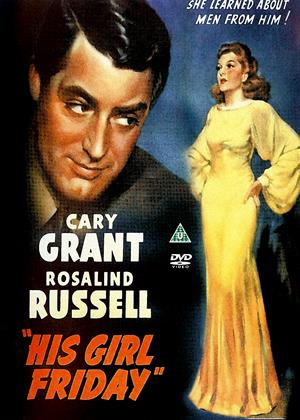 Reviews (3) of His Girl Friday

Howard Hawks' revision of Hecht and MacArthur's 1928 play The Front Page made star reporter Hildy Johnson a woman and the ex-wife of cynical editor Walter Burns, rather than just a colleague. What a fabulous moment of inspiration, enhanced by a hilarious rewrite from Charles Lederer. The funniest lines all come from Lederer.

In fact, the first half hour is the most sublime sequence of comedy I've ever seen, as Cary Grant begins to spin his web of deception around Bellamy, and of entrapment around Russell. But the film gets steadily darker in tone as it progresses and eventually critiques the death penalty, the depression, communism and political corruption!

The film is weakened by taking Cary Grant off screen for about half an hour which robs it of perfection. The source, The Front Page is a fine comedy (with more of an emphasis on the business of news reporting) but now His Girl Friday feels definitive. It's the ultimate Hawks screwball. The sparring between the stars is inspired and legendary, the rapid dialogue is limitless, dizzying and hilarious.

A classic - His Girl Friday review by JD

A lot of top 10 lists seem to be appearing in magazines. This was in one. It is an old film with picture and sound quality of the era. The dialogue is fast and furious with numerous cunning plots devised in an instant by the character of Cary Grant. This film I would imagine would have a market in the 60 - 80 year old bracket, for whom it may be a masterpiece. Not quite for me however.

The woman is not silly for a start - pretty amazing for a film made in 1940.

The film's premise is that a careers are important for women too; and that being a stay at home mum is not the only option; the male romantic lead proves his true love by showing how important her career is to her. I suspect maybe a bit of propaganda ahead of the USA joining the Allies in WWII; watch out for the brief mention of Hitler.

The sound quality is poor - but the dialogue is clear enough,