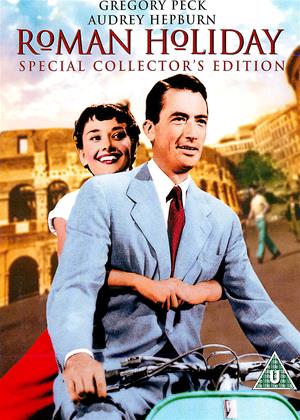 Having seen Spartacus, then Trumbo, we were interested to follow up the film for its connection with the scriptwriter's political troubles during the McCarthy era.

We were rewarded with a thoroughly amusing piece of lighthearted entertainment which made us both feel happy. One we'd happily watch again sometime.

This is an absolute classic! A fabulous film. Ms Hepburn is stunning in it. If you want a feel good movie then they don't come much better than this.

This is almost 65 years old but is still a charming, funny movie.

Great actors in this fairytale - a spin on the old story of a royal living amongst ordinary people. Supposedly based on a story by soon-to-be-blacklisted screenwriter Trumbo, but a VERY old story actually.

For those who know Rome, this is a joy - you can see Rome in the early 1950s, before all the cars, graffiti, African immigrants. A lost world really - in a time they allowed kids to clamber all over the Trevi Fountain!

Silly, fun and charming - this is a fairy tale film to warm the cynical heart.

This is an old film, which we much enjoyed when it was first shown. Watching it now we wondered whether it was still going to be enjoyable. At first we doubted it, as the first half is so slow, but the second part more than made up for that and we were very pleased that we had added it to our list.

This feels like one of those films that is more genuinely loved than merely liked or appreciated, and a great deal of that affection is thanks to Audrey Hepburn's charming, luminous performance in her Hollywood debut. She plays a fashionable princess continually courted by the media and driven crazy by the confines of public life.

For 24 hours she goes missing in Rome and has an adventure with a reporter  (Gregory Peck), and they flirt. Peck plans on selling his story, and Eddie Albert is the paparazzo who secretly takes the pictures. Of course, by the end, the newshound is in love with the Princess as much as the audience, and he spikes the scoop. The two stars are an all time great cinema match.

Dalton Trumbo wrote the story behind a front because he was on the blacklist. It is essentially the same story as It Happened One Night, but the location work in a touristic Rome transforms its appeal, and the beautiful setting, light and photography add so much magic to the gorgeous romance. Trumbo and John Dighton's screenplay is chic, and while it deals in innuendo, this is playful and witty . The narrative is a masquerade, with neither the Princess nor the reporter owning their true identity until the end.

The comedy becomes quite sentimental in the last third, but by then we are utterly under its spell and wide open to its heavenly frosting of emotion, which actually makes the film better. It is a stylish fairytale which sells us a ravishing edit of Roman life, of fashion, the ancient streets now full of vespas, of la dolce vita set against its incredible history.

This is the old blu ray - Roman Holiday review by KH

I was happy to get this and started playing and the picture was quite soft, I found out this is not the re-mastered version so its no better than the dvd, sent it back without watching..