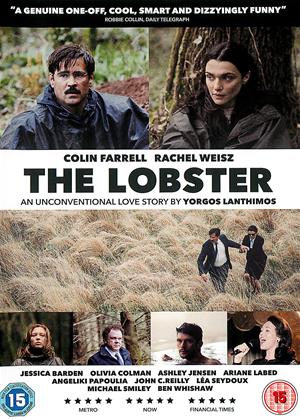 Synopsis:
Hilarious and utterly unmissable, "The Lobster" is a darkly funny love story set in a near future where finding love is a matter of life or death... According to the rules of The City, single people are arrested and then transferred to The Hotel. There they are obliged to find a matching mate in 45 days. If they fail, they are transformed into an animal of their choosing and released into The Woods. A desperate man (Colin Farrell) escapes from The Hotel to The Woods where The Loners live and falls in love, although it is against their rules.
Actors:
Jacqueline Abrahams, Roger Ashton-Griffiths, Jessica Barden, Olivia Colman, Anthony Dougall, Sean Duggan, Colin Farrell, Roland Ferrandi, James Finnegan, Robert Heaney, Rosanna Hoult, Bob the Dog, Ashley Jensen, Kathy Kelly, Ariane Labed, Ewen MacIntosh, Patrick Malone, Sandra Hayden Mason, Kevin McCormack, Ishmael Moalosi
Directors:
Yorgos Lanthimos
Producers:
Ceci Dempsey, Yorgos Lanthimos, Lee Magiday
Writers:
Yorgos Lanthimos, Efthymis Filippou
Others:
Efthimis Filippou
Studio:
Lionsgate Films
Genres:
Comedy, Romance, Sci-Fi & Fantasy
Awards:

Reviews (21) of The Lobster

After the rave reviews, I was hoping for much more than I got. I can see why it won a few prizes: it's the kind of film that gets film festival awards without really appealing to all that many people. It's also very similar to "Dogtooth" from the same director, which had a lot of the same basic themes, but a much richer vein of pitch-black humor, far more imagination, and an ingenious explanation for the utterly skewed world its characters inhabit. But this is a one-dimensional dystopia with absurdly specific rules that blatantly exist purely so that a torturous allegory can be spun from them. I was reminded of those old "Star Trek" episodes where the entire population of a planet have some ludicrous lifestyle such as pretending to be Napoleon, simply so that Captain Kirk can show up and explain how silly they're all being by punching them in the face. I also suspect that this film wouldn't have existed if "The Invention of Lying" hadn't been made first, and that wasn't exactly a masterpiece.

One crucial aspect of the movie, which I notice isn't even hinted at in the trailer, is that everyone is a borderline autistic who delivers almost every line in an emotionless monotone, including a lobotomized-sounding narrator who sometimes tells us in a flat, utterly disinterested voice about things another character has just said word for word. This is perilously close to plain old bad acting, even if they're doing it on purpose, and it wears out its welcome pretty quickly.

Another seemingly vital aspect of the film, which all the publicity material heavily emphasizes, is that the characters inhabit a world where anyone who is for any reason single has 45 days to find a new mate, otherwise they're somehow turned into an animal. This is in fact a cosmetic touch of random weirdness which has absolutely no significant bearing on the plot, though it does allow an otherwise dreary forest to be rendered lazily surreal by having a camel or a flamingo wander by occasionally. If this bizarre gimmick had been replaced by "people who are single for more than 45 days get shot in the head", it would have been the same movie with a less wacky hat on.

Why does any of this happen? If the fantasy world had been better imagined I wouldn't have cared, but it isn't, so I did. Why is everybody obsessed with being part of a couple? Since gay couples are permitted, it's not about the necessity to breed because they're running out of children, and religion is never mentioned once. And what's with the animal transformations that don't matter anyway? Ultimately, who cares? It's weird for the sake of weirdness without being interesting, it's only occasionally funny, its moral is clunkingly obvious and delivered by people who seem to have brain damage, and worst of all, it's pretentious. This is the kind of movie critics love just because it isn't about the Avengers smashing robots. That doesn't automatically make it good.

12 out of 12 members found this review helpful.

This film is called 'The Lobster'. It should be called 'Preposterous pretentious unfunny Eurotrash fantasy drama'. It clearly thinks it is so clever and original - but it really is not. Theatre and film have done all this surrealist absurdist stuff a great many times over the last 100 years.

This is billed as a comedy, Well, no laughs for me, just groans at how AWFUL it all is. Terrible dialogue - written, I see, by Greek non-native English speakers copying drama workshops and many postmodern theatre writers (Becket, Pinter et al).

A shame so many great actors were wasted on this drivel, esp Ben Wishaw.

A fantasy story has to create a willing suspension of belief in the audience. Jurassic Park does that. This pompous film does not.

I see it is state funded by lottery and EU; and is a Euro co-production. No doubt someone had contacts and cash to get this awful film made with our money. But the world really would be a better place without it.

The fantasy setting seems half-Irish and half-French, which is distinctly odd. The Irish accents made me think of Father Ted, and I half-expected some great gags and jokes. There were none. The French is more like it - France has made countless pretentious movies like this over the years.

Boring, unfunny, pretentious, dull and deeply derivative and unoriginal. The only good thing is that I didn't pay money to go and see this at the cinema (which I was considering due to the superlative reviews it got at the time! The film companies and director are obviously very well-connected to film reviewers...)

10 out of 12 members found this review helpful.

Great first half hour but alas.... - The Lobster review by CC

I was hoping for so much more.

This started really well and I was enjoying it up until a point at which I can't discuss without plot spoiling - but it involves animal cruelty and frankly I just found myself appalled.

From that point onwards I found the twist of the plot took the film into seriously tedious and pretentious territory.

I only didn't switch off because I think I was hoping for some sort of denouement which would redeem it.

My hope was in vain.

In summary, there are some decidedly nasty parts in this film which I don't feel it had earned the right to portray because it was so bereft of any soul.

Garbage - The Lobster review by MD

I watch loads of films, and I try to be receptive to different ideas and approaches. This film, though, floored me completely. It is WEIRD from the very first frame, and despite one or two touches of neat black humour and the odd good satirical dig (all in the first third of the film), it is mostly incomprehensible, pretentious garbage. It is overlong, very repetitive, and abysmally scripted, acted and directed. Sorry if I am missing something, but my advice would be, do not waste your time with it, even if you are a big fan of one of the famous names involved. It really does warrant 0 stars.

The Emperor's Clothes - The Lobster review by Alphaville

It seems silly to say that this absurdist comedy doesn’t make sense, but if a film doesn’t stay true to its internal logic it loses its audience. It requires you to buy into so many ridiculous scenarios that you may well lose patience. It might work as a book, but the particular realism of cinema demands a more thought-through scenario.

Given that you accept the basic premise of a hotel where guests have 45 days to find a mate or be turned into an animal, it’s difficult to believe that no one seems that interested in finding that mate. Characters behave more like Monty Python characters than recognisable humans. Main man Colin Farrell seems at times to be channelling the ghost of Dougal from Father Ted. If only. The acting is so relentlessly deadpan that there are few if any laughs. Some critics unaccountably described it as hilarious. It isn’t. There’s also an intrusive, pointless voiceover and an incessant classical music soundtrack, presumably intended as ironic, that doesn’t half grate.

As a piece the film just about holds the attention and the director certainly has an eye for composition that deserves a better film. Unfortunately he also wrote this one.

Lobster - The Lobster review by LS

Ive never eaten lobster "I'm just a poor boy, from a poor family" and after watching this I never will, I nearly lost my will to live, absolute cod, pun intended!.

I was hoping for so much more but was left very sadly disapointed.

What a very tedious exercise in self indulgence. I really cannot think of a worst way of spending my time than watching this tripe.

waste of your time - The Lobster review by RT

I expected much but this film delivered very little.

Monty Python meets In Bruges? Well, not quite........In Bruges was a great film. This is probably a fantastic film to the few odd people that managed to trump up the funds to make it.

Come back Terry Gilliam, all is forgiven. His films were odd and zany, and a bit zig-zag, but they were lively, fun, and colourful.

The cast is impressive (first attraction), the metascore, rotten toms, and so all rated incredibly highly (second attraction). So it must be something worth watching, right? Wrong. It was an absolute stinker. Boring. Dull. Weird. Incomprehensible. Clearly I missed its point. Note to self: Don't believe ratings and reviews. Erm...

Avoid this pretentious and vicious rubbish at all costs. I guess it's not surprising to find that it is EU funded..