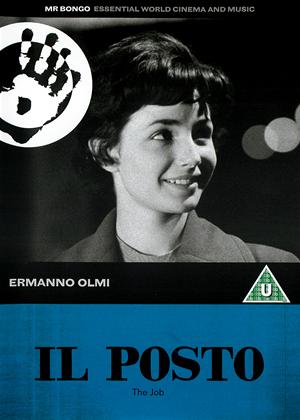 Synopsis:
Olmi's partially autobiographical 'Il Posto' is a satirical take on the alienation of office life. Domenico, a boy from the suburbs, goes for a job with a big corporation in Milan. Applying with him is Antonietta, to whom he takes a teenage fancy. After a gruelling entry process both he and Antonietta are accepted, and Domenico begins his life as a corporate worker. As he observes his fellow employees, many of whom have been there for years, he begins to anticipate the reality that lies in front of him.
Actors:
Sandro Panseri, Loredana Detto, Tullio Kezich
Directors:
Ermanno Olmi
Producers:
Alberto Soffientini
Writers:
Ettore Lombardo, Ermanno Olmi
Aka:
The Job
Studio:
Mr Bongo Records
Genres:
Classics, Drama
Countries:
Italy, Classics, Drama

Not much goes on - Il Posto review by RD

This has the basis of a charming film but it does drag on without much development or sense of involvement. Although only 93 minutes long it feels like several hours and it hasn't really started.

Olmi's first films were documentaries and the documentary feel infuses all his later feature films putting Olmi at the forefront of the Italian neorealist cinema.

The film tells the story of two young people entering the world of work, in this case a large office in Milan. The aptitude tests for the job are quite farcical, the people they work with are on the cusp of absurdity. The relationship between the two is beautifully drawn, they never kiss, hold hands briefly but the attraction between them shines on their faces.

Sandro Panseri who plays the young man Domenico has in some of his reflective moments the deadpan look of Buster Keaton particularly in the embarrassingly awful Christmas party he goes to, hoping to see Antonietta played by Loredana Detto. She gives a delightful, sparkling performance; she never made another film but did marry the director.