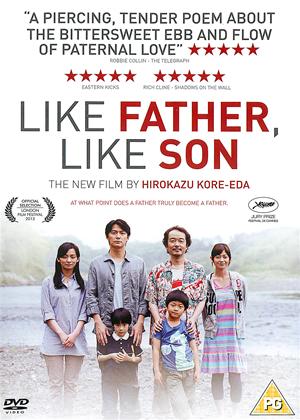 Synopsis:
Ryota has earned everything he has by his hard work, and believes nothing can stop him from pursuing his perfect life as a winner. Then one day, he and his wife, Midori, get an unexpected phone call from the hospital. Their 6-year-old son, Keita, is not 'their' son - the hospital gave them the wrong baby. Ryota is forced to make a life-changing decision, to choose between 'nature' and 'nurture'. Seeing Midori's devotion to Keita even after learning his origin, and communicating with the rough yet caring family that has raised his natural son for the last six years, Ryota also starts to question himself: has he really been a 'father' all these years...
Actors:
Masaharu Fukuyama, Machiko Ono, Yôko Maki, Rirî Furankî, Jun Fubuki, Shôgen Hwang, Arata Iura, Kirin Kiki, Jun Kunimura, Megumi Morisaki, Yuri Nakamura, Isao Natsuyagi, Keita Ninomiya, Hiroshi Ohkôchi, Kazuya Takahashi, Piêru Taki, Tetsushi Tanaka
Directors:
Hirokazu Koreeda
Producers:
Kaoru Matsuzaki, Hijiri Taguchi
Writers:
Hirokazu Koreeda
Others:
Kore-eda Hirokazu
Aka:
Soshite chichi ni naru
Studio:
Arrow Films
Genres:
Children & Family, Drama
Countries:
Japan, Children & Family, Drama
Awards:

This film could easily have been a cheap tearjerker but instead the intensely dramatic situations are handled very sensitively, elegantly even. Very good acting all round (including the swapped boys themselves) and genuinely tender moments. My only very minor complaint is that it seems to criticize the rich father's too-serious attitude without a mirror criticism being implied of the poorer family and their rather irresponsible lifestyle. Sadly, in real life, particularly in such a competitive society as the Japanese, a father demanding excellence is being every bit as loving and caring as one who flies kites.

Two families find they have been given the wrong son after a mix up at birth at the hospital. They meet and get to know each other. One couple are rich but staid, the other get by financially, but their home is full of fun and love. What happens when the boys have to choose where to live?

This family drama is moving and funny and grips you from start to finish.

The story of child swapping at birth suggests high melodrama. Instead it is a sensitive portrayal of contrasts in family life and the nature of fathering.

Kore Eda has been busy these last few years, and his films are always eminently watchable. He must have realised that he needed to work on the characters involved in this child-swapping drama. So we have a stuck-up city man on the one hand, and a laid-back Okinawan on the other. Eda, rightly I think, chose to make the two mothers take the back seat, because he wanted to pit the two men against the other. I do not think one should read anything anti-feminist in this. Once the swap has been established, the story develops along predictable lines, but if this means fewer dramas, the plot lines develop smoothly and intelligently.

You wouldn't want to be in their shoes, would you? - Like Father, Like Son review by DW

Two Japanese "chalk & cheese" families who have only one thing in common with each other are drawn into a deep & darkly emotional embrace.

About two thirds of the way through it, the wider significance of the films title becomes clear: blink & you might miss it so no comfort breaks!

Unsurprisingly, the finale is open-ended but even I (a non-parent) could see the way things were going to go in the future for these two contrasting families.

When a successful businessman learns that the son he has raised is not his own and that his biological son was switched for another child at birth he is forced to make a life changing decision about whether to chose the child who shares his blood or the one he raised as his own. From the director of the wonderful I Wish, a film that explores the lives of two children separated by their parent’s divorce, Like Father, Like Son is another moving and thoughtful picture by Japanese director Hirokazu Koreeda.

Just as he did in I Wish Koreeda presents his audience with a slow and gentle narrative that allows his characters to develop and evolve whilst remaining connected with the others around them.

Connection and the bond between families is put under a microscope here, though it remains an undiluted emotional rather than scientific experience; the businessman father, Ryota Nonomiya (Masaharu Fukuyama) loves his six year old son, Keita, he wants the very best for him and the film begins as he and his wife watch the boy regurgitate seemingly perfect answers at an entrance interview for a prestigious school. Yet there has never been any particular connection between the two, they do not share an emotional bond and there is no affection shown between them. Upon learning that this boy is in fact not his own but the son of a middle class shop owner with two other children Ryota believes that this gulf has always been because of this.

The four parents decide to switch their children back, slowly integrating them into the birth families by inviting them to stay first only at weekends, however when Ryota sees Keita slip happily into his new life, welcomed by his siblings and warmly accepted by his parents, he is forced to question whether there was more to their missing connection than a lack of shared DNA.

Like Father, Like Son is a gentle film, there is no other way to put it, it explores potentially difficult, painful and complicated emotions at a solid and well timed pace, it does not rush the characters, nor the story and, though some may find the film tedious, others will see the beauty inherent in it.