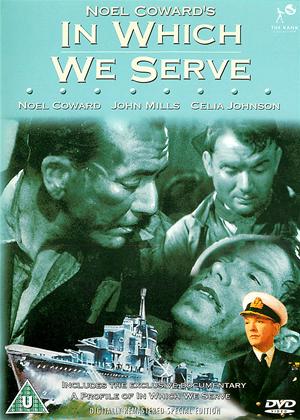 Reviews (2) of In Which We Serve

Classic wartime drrama - a must watch for the whole world! - In Which We Serve review by PV

OK so this is a bit dated BUT just think: this was made in 1942. Britain had already fought for 2 years ALONE as the USSR was in hock with Nazi Germany and the USA sitting on the fence (and would have dealt with Hitler if, as Joe Kennedy expected, he'd invade Britain).

Just imagine people watching this at the local pictures. It would certainly boost morale. Now it exists as a tribute to all those Britons who lost their lives in the war and a nation who fought alone and fought bravely to save the world. It should be shown in every classroom of every school in Britain. Sadly, it many classrooms it would be mocked because daft 'political correctness' has made hating one's own country fashionable. But just imagine what the world would look like if Hitler had won the war! And without Britain's bravery, he would have done. In 1941 or 2.

This is a Noel Coward Tour de Force. Coward needed a director as well as himself as he needed another director for scenes he was in (Noel Coward stars as the captain of this ship). He selected the editor David Lean - who went on to direct Lawrence of Arabia etc.

So this film stands tall as an important one in cinema history.

The then 'King &. Country' - In Which We Serve review by DJ

In contrast to the assessment of others, I found this film fell short on interest.  The opening was filled with action, leaving the remainder of the film rather flat, as it was malled by repetition.  A series of flashbacks covers the individual lives of the crew.  it got to the third crew member, which proved just too much for me to handle and I switched it off.

Noel Coward had a brilliant mind, wrote incredible music scores and was deemed a playwright with exceptional ability, but, to many, failed as an actor, as he was unable to mask his self-assuredness, pomp and rapid speech ... he could touch 200 wpm with ease.

The genre of this film comes under the heading of 'war time propaganda', necessary in its day, as it helped people survive the threat of tomorrow.  Back then, it was honourable to dupe the people into having hope and convince them that their men would return from the trenches.  To this end, it is thick with so much improbability, as to be unacceptable.  However, the camerawork was excellent, but I found Noel Coward somewhat overbearing ... yet he comes from that era and that's how it was back then.