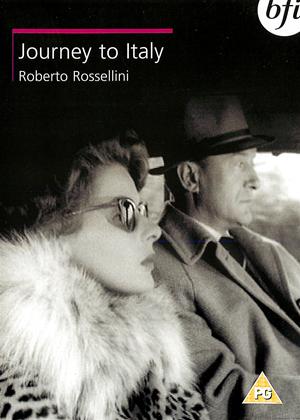 Synopsis:
Widely misunderstood and shamefully denigrated at the time of its original release, but now recognised as not simply one of Rossellini's greatest films but as one of the key works of modern cinema, 'Journey to Italy' is a deceptively simple piece. There is little plot to speak of: a marriage is breaking up under the strains of a trip to Italy, and we watch. But in its deliberate rejection of many aspects of 'classic' Hollywood narrative and its stubborn pursuit of a quite different aesthetic, its meandering story line creates space for ideas and time for reflection.
Actors:
Ingrid Bergman, George Sanders, Maria Mauban, Anna Proclemer, Paul Muller, Anthony La Penna, Natalia Ray, Jackie Frost, Bianca Maria Cerasoli, Adriana Danieli, María Martín, Lyla Rocco
Directors:
Roberto Rossellini
Producers:
Roberto Rossellini, Adolfo Fossataro, Alfredo Guarini
Writers:
Vitaliano Brancati, Roberto Rossellini, Colette, Antonio Pietrangeli
Aka:
Viaggio in Italia
Studio:
BFI Video
Genres:
Classics, Drama, Romance
Countries:
Italy, Classics, Drama, Romance

Reviews (3) of Journey to Italy

"He wasn't a fool, he was a poet." "What's the difference?" - Journey to Italy review by WS

There's certainly dramatic potential in the storey of this ill-matched couple in an unfamiliar country. Katherine is captivated by Italy and is open to new experiences even though she finds some aspects of Italian culture eerie and discomforting. Her husband Alex is a philistine bon viveur who loves wine, good food and beautiful women, but affects to find Italy insufferably boring. He cultivates a brusque, cynical attitude which barely conceals a deep insecurity, especially a terror of being alone.

The development of the plot and characters, it has to be said, is flaky. Early on, the Joyces remark on how this is the first time they've really been alone together since they were married - but how is this possible when they have no children or live-in relatives? They talk about their floundering marriage in a surprisingly casual and dispassionate way, and in successive scenes in the first half they alternate between frigidity and affection for no apparent reason. The George Sanders character is evidently a man of means but lacks the bombast and swagger you would expect in a member of the old moneyed elite or a self-made businessman - he comes across as just too reserved and middle-class. Ingrid Bergman, despite her accent lurching between Stockholm and the Home Counties, brings greater subtlety and conviction to her role.

So how can I justify 4 stars? Partly the gorgeous photography and locations. There's the beautiful tree-lined avenues, the Neapolitan street scenes, the fumaroles and lapilli plains on the slopes of Vesuvius, the catacombs - which work partly on the level of pure spectacle, but also often symbolically, although the symbolism is never blatant or over-wrought. Reminders of sex and death are death are everywhere, whether it's the nude Hercules and limbless Venus in the museum, the skulls in the crypt, or the bodies of ancient Pompeiians being excavated from their volcanic mausoleum. Faced with the precariousness of human existence, the couple are compelled to re-evaluate their own lives and relationship.

Despite its narrative flaws I felt motivated to watch the disc a second time and it's grown on me since.

Journey into understanding. - Journey to Italy review by RhysH

The film has been described as the Italian film that kickstarted the French New Wave, a very important film. For me it does not live up to that billing. Yes it has the languid introspection of the new wave where little happens but a lot is understood but often loses its way under the Italian sun in a miasma of frustrated egos.

George Sanders was said to be annoyed at the lack of a definitive script for the film. It shows in his performance which is somewhat stilted, although this could be an excellent performance of an unemotional English businessman. Ingrid Bergman as his wife, gives a more nuanced performance without going too deep into the emotional turmoil of the character.

As always in a period piece, in this case Naples in 1954, the street scenes give a great documentary context.

The film seemed ideal: Rossellini, Bergman and Italy. A couple travels to Italy for family business and find that their marriage is falling apart. Unfortunately I found the acting lousy - the actors were asked Rossellini to improvise and clearly were not made for it - the direction non-existent, the photography appalling, the dialogues flat, the plot...is there a plot? The film is boring from beginning to end and you wonder why some critics hailed it as a great film. Watch it only if you want to see with your own eyes how bad it is.