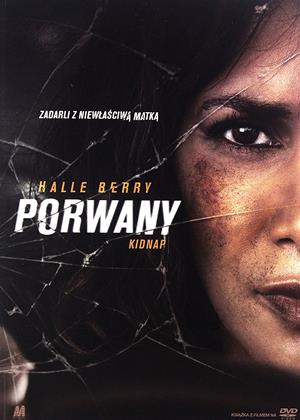 Synopsis:
A typical afternoon in the park turns into a nightmare for single mom Karla Dyson (Academy Award winner Halle Berry) when her son suddenly disappears. Without a cell phone and knowing she has no time to wait for police help, Karla jumps in her own car and sets off in pursuit of the kidnappers. A relentless, edge-of-your seat chase ensues, where Karla must risk everything to not lose sight of her son. In this tense, action-fulled thriller, directed by Luis Prieto and from the producers of "Salt" and "Transformers", one mother’s heroic attempt to take back her son leads her to ask herself how far she will go to save her child.
Actors:
Halle Berry, Sage Correa, Chris McGinn, Lew Temple, Jason George, Christopher Berry, Arron Shiver, Kurtis Bedford, Carmella Riley, Brice Fisher, Jennie Ventriss, Timothy Fannon, Andy Wagner, Malea Rose, Jill Alexander, Holly O'Quin, Andy Abele, Andy Dylan, Robert Walker Branchaud, Kevin Johnson
Directors:
Luis Prieto
Genres:
Thrillers

Not released
The Whole Truth

Films that tackle tough criminal subject matter but also want to an action-packed thriller usually tend to stumble when it comes to mixing both. And Kidnap is one of the biggest stumblers I’ve seen in quite some time. It takes the concept of how children are abducted and weaves a Death Wish style cartoon of one determined mother that can get in her car, find the bad guys, and save the day. And it’s a chase that gets so manic and gritty it never takes a moment to decelerate and see just how ridiculous it turns out to be, even for a film with over-the-top car chases and dragged out kills.

Halle Berry plays a single mother struggling for custody of her son, trying to maintain her shift at the diner and take her kid to the park while also balancing her trial. There’s an absurdly building tension throughout the first few minutes as Berry and son speak blatantly about being a superhero, playing Marco Polo to be seen at all times, and how much they love each other. It’s all very mushy and hand-holding but strangely pointless when the real chase begin. Notice how Berry encounters some bitter customers at the diner in scenes that will have no effect throughout the rest of the picture but are staged as though there’s some clue lurking behind the snippy young gal who wanted steel-cut oatmeal.

She seems to take all the precautions of a protective parents, keeping a close eye on him at all times. But, wouldn’t you know it, the one time she lets her guard for an instant, while on the phone talking custody no less, and her son is gone. She does catch up with the kidnapper before all hope is lost however; a white couple that have forced the kid into her car. They want money and are willing to go so far as to get in a high-speed chase that doesn’t seem to attract police. It does, however, attract Berry as a mom with a mini-van with a lot of luck to go blazing through traffic and still catch up with her kidnappers.

This is a farce that forgets to pump the brakes before it goes spinning off the rails in absurdity. There are many moments where it would seem that Berry is losing her mind. Did she loose the car or mistake the same model? Not a chance; she’s a mom on a mission! Will she stop once the cops are involved? Heck, no; if she stops, she’ll lose the kidnappers! Even when her chase results in a serious injury to a civilian, she still keeps going. Sorry, bystander, but a crazed woman tracking kidnappers apparently has right of way, considering she’s declared a hero by the end of the picture.

Watching this picture requires a tunnel-view of the thriller aspect to appreciate its thrills but you really have to leave you brain in the minivan for this one. It’s little more than a loose excuse to pose Berry as a kick-butt mom who gets to beat up criminals real good with choking, drownings, and shovels to the face, complete with a cliche trailer-worthy zinger; “You messed with the wrong mom!” But Kidnap has also messed with the wrong genre, playing things far too standard for a rather trashy tale of violence that treats real-world criminal cases of missing kids with the same observance in gun violence of Death Race. It exists in the same wild world where vigilantism seems to be the one and only method of seeking justice, guaranteeing success and glory for those dumb enough to go gung-ho into the lions den. Berry’s picture is just a tad more troubling because she seems to do decently as disrupting the law and taking on knife-wielding, gun-toting maniacs with little more than her purse. Of course, it’d be stupid to believe that any mom could be so successful with such a crusade, but, then again, so are the left-field twists that try to mount the terror and horror to laughable degrees.