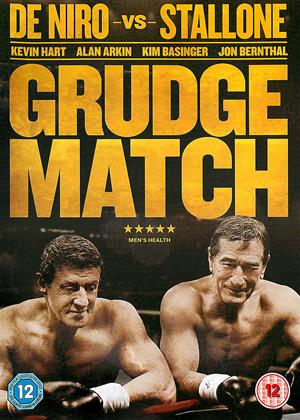 OK this movie is not a classic like Rocky or Raging Bull, but if you are a fan of these movies hire it. There are a number of scenes where they both pay homage to the above classics. It's a light hearted comedy and enjoyable movie.

There is no denying that Sylvester Stallone did some of his best work playing Philadelphia resident/ professional boxer Rocky Balboa and there is nothing wrong with Grudge Match capitalizing on the idea of yet another go around the ring for an actor who has since given up the search for a redefining role but you'd never expect him to be this good in it.

Grudge Match follows Razor (Sylvester Stallone) and Kid (Robert De Niro), two retired boxers who never quite got over the fact they never had a deciding bout, a match to tell them who was really the best. When a boxing promoter comes around looking to put on the fight they must get past their age, their cynical friends and critics and get back into the ring one last time to finally decide between the two.

While the film is complicated by some sordid history between the two, at its heart Grudge Match is the story of two athletes doing what they love and that I can understand. Both Stallone and De Niro reinvent their boxing personas, Stallone's from Rocky and De Niro's from Raging Bull, to create completely different and equally entertaining individuals. Their devotion and love of something other than the people around them is intriguing.

However the film really excels as a comedy, it's witty, not just in its marrying of young and old performers and jokes but also through the way it handles the simple premise. Both Razor and Kid share barbs in a playful manner, never overworking the feud between the two so that it seems idiotic. The film actually keeps things simple, human and endearing.

Supporting performances by actors like Kevin Hart. Alan Arkin and Kim Basinger help push things along but in the end director Peter Segal isn't above the overly saccharine ending, the one where things just seem to align. The film itself is messy, giving glimpses of a world forgotten by those with money, a theme that could have used some elaboration sure but one that added more than flavour to the story.

The film may fill a studio's boxes for nostalgia viewers but at its core its a return to form for Stallone whose action persona has grown stale. It's good to see a serious side to the man, even if it isn't quite Mr Balboa.