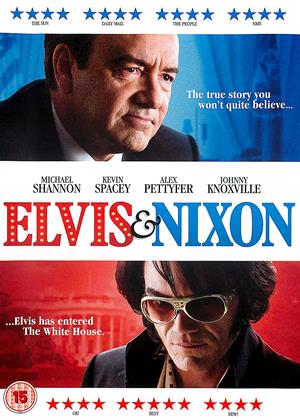 Reviews (2) of Elvis and Nixon

This movie is basically based on a photo - the most requested one in the US archives, namely the one of Elvis and Nixon when he visited the White House in 1972.

It's all a really funny romp, with some laugh-out loud lines, and some hilarious riffs on the early 70s (eg King Fu culture etc). Clever writing and - unusually for Hollywood - a movie that is less than 90 minutes long! Hoorah! I am sick or 120-180 minute yawn-fests!

I am SO pleased they didn't just choose someone who looked just like Elvis to star - the actor playing Elvis inhabits the role wonderfully; he doesn't just give a cheap impression.

The masterful Kevin Spacey gets Nixon off to a tee too. And the supporting cast are great as well.

This is a clever and very well-written film, though based on a slight premise with little plot (and the subplot of E's assistant and his girlfriend is never cloying or schmaltzy). Great music too.

Not just boring, or extremely loosely based on one event, but why not actually get someone similar to Elvis? Guy has some of the voice patterns and mannerisms, but that is about it.

As an avid moviegoer and a general pain in the b**t for ruining other people’s experience by deconstructing why a certain movie sucks - I can proudly exclaim a gem of a movie when I see one. Sadly enough, this isn’t one, but it’s so desperately trying to be that you almost find yourself feeling pity for everyone involved in the project. Elvis and Nixon could’ve been great if only to addition of Michael Shannon and Kevin Spacey’s impeccable performances there was a story for one to latch onto never let go.

Director Liza Johnson, paired with actors-turned-writers Joey Sagal, Hanala Sagal and 90’s comedic icon Cary Elwes, produce a piece that will go down as an attempt to dive into American politics under a different angle and re-examine its relation with pop culture some 30 years ago. And a failed one at that. The sole thing that’s keeping this film from not crumbling under its own lightweight screenplay is the two lead actors’ convincing performances that stop at nothing to show the world how talented they are.

First, Michael Shannon. His depiction of Elvis’ mannerisms is spot on, even if he looks nothing like the superstar we all came to know and impersonate. From subtle nuances, his psychological battles with addiction and his gaze of a defeated man – Shannon just nails the Elvis Presley role in all ways possible. Although the former gets somewhat overlooked (his drug problems), it all falls together upon a single glance to Shannon’s body language as the eponymous King of American rock.

Then, as events follow some side characters who add nothing to the mix (Johnny Knoxville, Alex Pettyfer and Sky Ferreira), we’re slowly finding out who Kevin Spacey’s Nixon really is, how he walks and talks, and most importantly: what he thinks about Elvis as both a celebrity and a human being just like himself. Unbeknownst to Nixon, in a historical shot where both men meet for the first time, it quickly becomes clear that the president is playing Presley for his own personal benefit. Crystal clear to us as the audience - but not so in the case of President Nixon’s on-screen character.

Elvis and Nixon is a slow burn experience at best, and a 101 editing manual of how not to pace a movie – especially when you’re injecting a pint of comedy into an otherwise serious subject. This is especially true for the final act, when all pre-established narrative thread falls apart in awkward encounters between Elvis Presley and everyone else.

All things considered, it can be safely stated that Elvis and Nixon is as safe a movie as a ‘30 day money back guarantee Top Shop stop baldness’ offer. This isn’t to say you should immediately buy it, but probably rent it for a laugh or two.