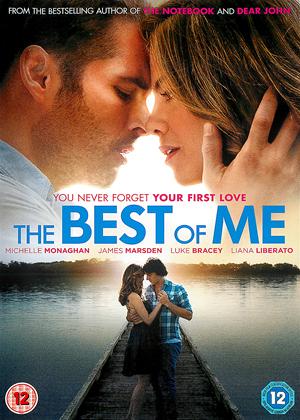 pleasantly surprised - The Best of Me review by jaysha

I thought this would be a watchable average film. I found it had a good plot and all the actors though not known to me were very good. It was believable and the ending was unexpected. I would recommend it as an easy watch.

Not expecting the end - The Best of Me review by CW

Very good film,expecting happy end but that would have been to easy. Moments in film take you by surprise.

Excellent! - The Best of Me review by CP Customer

This is the first time i have written a review, but thought this was definitley worth writting about! such a good film, its really sad but happy, If you like the Notebook you will love this, its very well made and great acting, will have you in tears mind! 10/10

The Best of Me review by Michelle Sommerville - Cinema Paradiso

Only rarely do I like a film like this, and then I usually only watch them late at night when no one is there to catch me. Best of Me is the film adaptation of the novel by Nicholas Sparks. I don’t have a lot of experience with works by Sparks, but I do know that he has a lot of devoted fans. It’s a good story that - without giving away too much - shows that Sparks is interested in improving his writing. Worth the watch and sure to give you two hours of entertainment.

Best of Me begins with young Romeo-and-Juliet-esque lovers. Amanda and Dawson are from different backgrounds, with Amanda’s family making it more than clear that she is too good for him. It isn’t until Dawson finds himself on the wrong side of the law and in prison that he knows that isn’t the right life for Amanda, and he tells her goodbye. But as the saying goes, it’s a small world. Twenty years pass and Dawson and Amanda reunite. Amanda - unhappily married and with a family - is torn between the life she always wanted, the life she has, and the life she still desires. To make matters even worse, trouble once again comes looking for Dawson. Will Dawson and Amanda finally be able to let go of the past, or has their story only just begun?

This film definitely has its good and bad aspects.

Firstly, without going into specifics, the film is not as straight-forward and generic as you would think. The story elements that Sparks has expanded and improved, really do make the film different from his others - and his books - and you feel surprisingly content with it as a whole.

The acting was the right level of melodrama for a Sparks film, however it is also one of the biggest letdowns of the film. There are so many actors out there, that you would think finding two that looked even slightly similar wouldn’t be impossible. Young Amanda and Dawson look absolutely, one hundred percent, nothing like Older Amanda and Dawson. This is mostly evident for Luke Bracey and James Marsden. Not only are aspects like their hair and eyes so different, but their entire body structure is. It’s also been said that the first-choice of casting for Older Dawson was actually Paul Walker, but this had to be changed after his unfortunate death. However, even Bracey and Walker don’t have enough in common to try and be the same person.

Back to good: the emotion is something that Sparks does well. He knows how to make you feel what he wants you to feel.

The soundtrack was also good and is sure to sell a lot of copies.

Overall, not a totally unwatchable film. The end makes up for some of the earlier downfalls, but it’s not a film that will break any records or win a bunch of awards.