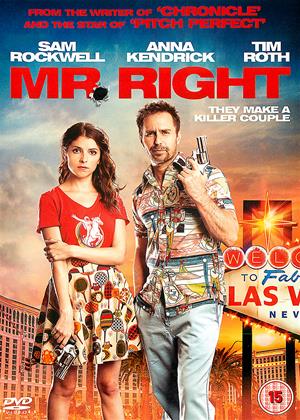 Mr. Right is your typical American comedy that thinks it’s subversive, but instead it ends up just as formulaic as its predecessors, and dare I say it: cliché. There’s nothing new and inventive about this slice of celluloid tape, as every scene and build up thereafter provides little to no entertainment whatsoever and only serves to fill up screen time and waste audiences’ precious time. Several bright spots exist however: Sam Rockwell’s acting, Anna Kendrick’s mannerisms and perhaps Tim Roth’s big, explosive comeback. Although, I can’t remember when Roth hasn’t been explosive, as he surely always acts like his very existence depends on his performance.

Mr. Right is written by Max Landis, and as such one would expect at least a decent screenplay which doesn’t make up things as the camera rolls. This is not the case however, since Mr. Right is everything but decent, and proves all but entertaining.

Francis (played by Sam Rockwell) is a maniacally sadist serial killer with a strict moral compass to only assassinate those who reached out for his services. Martha McKay (Kendrick) is an equally sadist character who, in search for Mr. Right, stumbles upon Francis’ persona and an immediate spark kindles a two-way romance which prolongs more than what’s necessary to keep us entertained.

One thing scribe Landis misses is to make Martha a decent human being, decent in the sense of a complete character that doesn’t sound insane every time she opens her mouth. It’s also becoming an apparent trend to make female characters less than what they deserve, at least for the major Hollywood community: either they’re one-dimensional cardboard characters without a persona underneath, or they’re overpowered plot locomotives without real flaws, and with everything going their way. Sadly, Anna Kendrick’s character borrows some from both instances, and in large amounts also, which is more than unwelcome when you come to better think about it.

Is it so hard to fully flesh out a girl in a screenplay?

The action falls completely in the ‘unrealistic’ category, and for good measure also: people catch blades with little to no training, small-built people wrestle down bigger people like it’s no one’s business; heck: it seems like even the actors can’t believe what they’re doing when you look closely into their eyes. Music is ok-ish, cinematography is mediocre and pacing is well off. If you’re looking for a smart, slick and visually decent action comedy film, Mr. Right is way, way off the mark.

Finally, one good thing it can be said for this particular film is that is short, and will probably be short-lived in everyone’s memory. If not, then we have a serious problem of valorizing standard pieces of cinema art in our current stance.