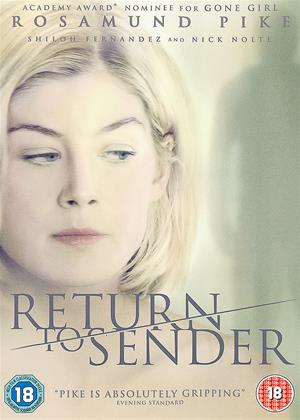 Reviews of Return to Sender

Rosamund Pike, having previously starred in 2014’s Gone Girl, finds herself in another female-revenge drama where she takes aim at men that wronged her. But whereas Gone Girl took a hard look at the media perceptions around dark plots of vengeance, Return to Sender treads too lazily and sloppily into Misery territory - filled with uncomfortable rape and vile retribution. Suffice to say, she won’t be nominated for an Oscar with this role.

I certainly wanted to like Pike’s character Miranda, a chipper nurse with high aspirations of becoming a surgeon and buying a new house. She has a great relationship with her co-workers, bakes decadent cakes as a hobby and a lovable dad perfectly played by a bearded Nick Nolte. I didn’t want to see Miranda raped in her home by a stranger and have her whole world crumble. Despite catching and prosecuting the rapist, Miranda has become so shaken and depressed that her medical promotion is denied. The rape in her home brings down the value so now she can’t even sell her place. Bitter and frustrated with her post-rape life, she busies herself with home improvements to make a fresh start.

At least, that’s what I assumed for the first two acts. It’s revealed in the third act as a shockingly farfetched twist that all this reinventing and constant contact with her rapist was a ploy to lure him into the basement for a game of misery. Turns out she had been practicing this whole time by testing out her torture methods on her dad’s dog. The movie quickly turns from a drama about a troubling subject to a disgusting Misery takeoff. Miranda cuts off the rapist’s hand and mocks him by pretending to be gripped by the chopped off limb. She has progressed from the charming nurse to the depressed victim to the violent avenger.

The third act would be an opportune time to give focus about where a rape victim can go once they’ve brutally tortured their oppressor. Unfortunately, it’s never explored as the movie just cashes in its chips early as a trashy rape revenge picture. There’s a sense that maybe director Fouad Mikati made this picture out of passion and rage for the wronged women. Mikati tries to get inside the mind of a raped woman’s horrific life that follows and paints a picture of pain you want to empathize with.

But there’s a sense that the story hits a painful wall where nothing easy will follow in either reformation or retribution. It would be an interesting angle to examine rather than just cave to a fantastical resolution. Sure, it does seem vindicating for a victim to tie up their rapist and beat him to a bloody pulp. But what happens after? Will it really improve the life of a victim? Will it undo the damage to their soul and fix the setbacks the event caused? The movie seems to suggest it will by how quickly it wraps up with Miranda losing the shakes and feeling fine that her rapist won’t be around anymore.

The cast is at least serviceable for such a messy picture. Rosamund Pike proves once again that she’s capable of taking on the role of a complex woman with waves of mixed emotions flowing through her eyes. Even when she’s reduced to a cartoon character for her revenge scene, she never goes so far over the top that it prevents the scene from being worse than it already is. And how could you go wrong with Nick Nolte as warm father with a gentle and willing soul. Every scene with him is a real treat and makes me wish he had more roles such as this one.

Return to Sender needs to make a trip back to the screenwriting factory for a better thriller. It’s a plot that simultaneously cops out and pulls a gotcha moment in hopes that it will surprise its viewers and make them cheer for the rapist to be slaughtered. In fulfilling that fantasy, however, the story feels more insulting the way it refuses to face the real drama that’s far more interesting. Did you really think you were watching a grounded tale of a woman’s plight? Sorry, turns out you’re just watching another female revenge picture. But wasn’t it entertaining how the movie duped you? Don’t you just love it when movies lie to you in their third act to deliver something too simple and soulless than what it was aiming for? It almost makes it seem as if there were more to the movie in its trickery than just appearing as a dead-end plot for a mediocre script.