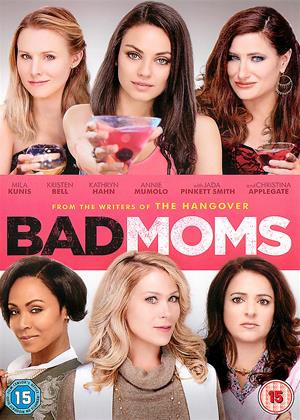 Hilarious - Bad Moms review by AS

Very crass chick flick that had me in stitches. If you've had a bad day and feel like being cheered up give this movie a go.

The previous reviewer has summed up this film really well. I liked the concept of a 'bad mom', but I think it let itself down - the jokes sometimes fall flat and the when they try to add depth, it doesn't come off. What I found most disappointing was in its vision for America, the version of the bad mum: white and middle class. If there are any characters from non-white backgrounds in the film they speak in 'black talk' - stereotypes really. I think the film could have been a little more sensitive/subversive. That said, I can't improve on the previous reviewers comments: if you had a bad day and you need cheering up this will help!

Bad Moms is a bad example of a bad comedy piece that could be worse by a stretch of a margin – if not for the on-par acting and unintentional chemistry between the main female protagonists. Other than that, Bad Moms has nothing else going for it, which is rather disappointing considering how much money are poured in the project, in turn written by pens that practically invented a whole new genre with The Hangover franchise. As it stands, Jon Lucas and Scott Moore should up their game if they want to get projects in the near future among the Hollywood blighter gang.

This one sees Mila Kunis playing Amy, a middle-aged mom whose affinity for the ethical living puts her on edge, and her atypical husband doesn’t help either. Meanwhile, her two kids, demanding as they are, prove little more difficult to raise as what Amy initially thought her marriage would provide by itself. So, desperate and on the edge, Amy decides to head up to a bar nearby and forget all her worries by consuming large quantities of alcoholic beverages. There, she meets Kristen Bell’s Kiki and Carla (played by Kathryn Hahn). Little did Amy knew she would form a rag-tag trio of Bad Moms (roll credits) to battle an unforeseen enemy embodied in flesh by a certain head of the school Parent Teacher Association (PTA) named Gwendolyn, in turn played by the always charismatic Christina Applegate.

From here onward, a Battle Royale ensues, with tactics and resources seeing little to no sparing whatsoever.

Most of the time, Bad Moms is nearly watchable thanks to aforementioned chemistry between the lead protagonists and one Gwendolyn that’s acting against their interests. However, there’s particular set of scenes where a cohesive narrative structure, instead of being a given – turn up nonexistent as audiences are left to ponder ‘what the bloody hell happened there’, without the film providing answers, leads or at least bread crumbs in regards to its buildup of main events.

When compared to lesser forms of cinema (eyeing you Dirty Grandpa), Bad Moms plays to a large extent as if Lord Tennyson scribed himself scribed parts of it (in his inspiration-free days, of course); The editing is there, yes, but nothing out of the ordinary. Music and sound mixing sound OK, as long as you’re not expecting Titanic or anything of the sorts. Kudos as well to young Oona Laurence, who delivered more as Jane than, say, one Ruby Barnhill in the mixing bore that was BFG.

Ultimately and unfortunately, Bad Moms is thoroughly skippable since it offers nothing new to the always stagnant comedy niche from Hollywood. Instead, you should opt for The Hangover to get the (yet) best out of the duo that is Jon Lucas and Scott Moore.