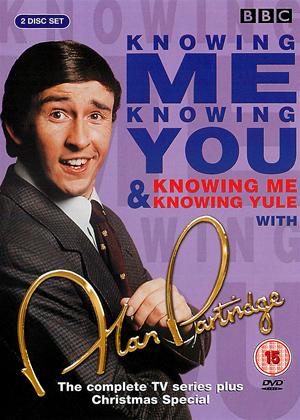 Typical Alan Partridge fare, you'll either love it or hate it. Personally I think this is pretty much as good as Steve Coogan gets.

This isn't quite where it all started - that would be "On The Hour" on BBC Radio 4 in 1991 - but it's where it all really started. Here we have the entire, sadly brief run of the chat show hosted by Norwich's most celebrated son (except possibly Bernard Matthews).

Alan Partridge is one of the all-time great British comic characters, easily ranking alongside Basil Fawlty, whom he somewhat resembles, since they're both arrogant self-centered fools too stupid to know how terrible they are at their chosen professions, but just smart enough to know when things are spiraling out of control, though of course they're far too pig-headed to admit it until it's too late. And they're both, underneath all the bluster, desperately insecure.

The big difference between them is that Alan Partridge is still with us as an ongoing character 24 years after his debut, so it's fascinating to look back at his one brief moment of glory in the light of how he's since developed. And it's all there right from the start. Watching his doomed attempts to cope with his guests, some of whom would have been problematic even for a good chat-show host, is comedy of embarrassment at its finest. And, appalling though he is, he's naïve enough that it's hard to dislike him, inexplicably mired as he is in the early seventies, just after Abba and just before punk.

He's the unpopular kid at school who desperately wanted to be noticeable and attractive and above all, liked, and 30 years on, still can't manage any of those things, so you feel his pain when you find out that he still hurts over the time the school bully stole the rather pathetic gift he got for his 10th birthday, or when it turns out that his entire supporting cast and crew had a great night out to which they deliberately didn't invite him, or when he endures the ultimate humiliation of having to announce on his final show that next week it'll be replaced by something the BBC thinks will get a bigger audience, despite being aimed exclusively at lesbians.

So instead of the one-note obnoxious boor a lesser actor would have made of him, Alan Partridge is just tragic enough to make us care about him without taking the edge off the humor resulting from his dreadful behavior towards his guests. And he's not always entirely in the wrong. Some of his guests are far worse than he is, and they deserve all they get. Once in a while, he even manages to be absolutely right, usually while wearing an expression of stunned incredulity that somebody this pretentious and/or horrible actually exists.

This is comedy writing and acting at its finest, and explains why, 18 years after this series was made, an entirely fictional chat show host was still popular enough to spin off a feature film that did rather well. If you liked the more recent Alan Partridge material, go back to his roots and see him the way he wanted you to see him. You'll also discover exactly why we're still waiting for the BBC to give him another chance, and the best he can do in the meantime is Radio North Norwich, gun-sieges and all. Highly recommended for fans of great character comedy and sheer silliness.