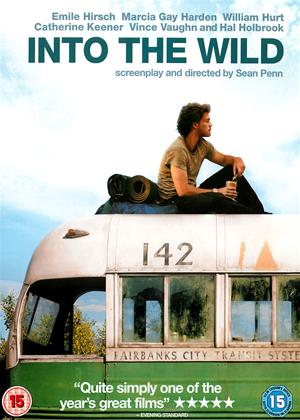 Reviews (7) of Into the Wild

into the wild - Into the Wild review by CP Customer

good watch well recomended and if a touch long,never misses to keep you interested,great photography,wish I seen a high def version.

Haunting, moving, though not entirely accurate. - Into the Wild review by CP Customer

Based on the book by Jon Krakauer, Into The Wild tells the story of Christopher McCandless, a middle class 22 year old, who after graduation from college gives away the remaining $24,000 of his college fund to charity, destroys all forms of identification and heads off on a quest to live in the Alaskan wilderness, along the way camping outdoors and living off the land. One thing I did feel uncomfortable with is that the film is pretty selective on what speculative information is depicted as true events and what known events they selectively chose to ignore. The book is very much based on third party accounts of McCandless life and McCandless’s journal of abbreviated notes, which has been updated by the author many times due to repeated criticism of Krakauer’s disregard of factual events and the authors’ speculation of unknown events. Sean Penn’s film shows Christopher McCandless as naive, focussed, sometimes selfish but overall in a fairly good light. When in truth McCandless was often described by others as reckless, arrogant and lacking any common sense. Despite the criticism of being slightly one sided and selective of actual events, this is a very good film, with stunning cinematography and first rate performances from the whole cast. Be warned, this is quite a slow paced film which feels every minute of its two and half hour running time, however it does hold your attention throughout. If it ever gets a DVD release you should also check out the 2006 documentary ‘Call Of The Wild’ in which filmmaker Ron Lamothe retraces McCandless’s exact journey through 30 states and interviews those who came into contact with him.

Nauseating - Into the Wild review by Tim from London

I was very disappointed with this (very long and plodding)film about a young gifted boy who breaks all ties with his family to venture into Alaska. This is not however a journey to 'find himself' - as this 23 year old is completelly self-aware and able to pass on his knowledge and wisdom to all the grown ups he meets on his way. As you can probably tell, I felt that the film fell into the trap of idealising the boy and his motives. Yes, we are shown some of the consequences of his actions on his parents - but we are firmly told that they are bad people who probably deserved it. This is not helped by a tedious voice over - full of cliches dressed up as art. The film clearly saw Christopher as being 'a symbol of countless young people' - I thought it presented a very good argument in favour of national service!

Not my usual kind of film, but I rented it after seeing its high rating on IMDB – currently (April 2012) it has a score of 8.2. While I liked the photography and (some of) the Eddie Vedder soundtrack, I found it to be a over-long (2 hours 20 min) pretentious tale about the not-very-interesting travels of a poor little rich kid, who meets an assortment of well meaning but not-very-interesting characters while travelling round the US. He then ventures ill-prepared into the Alaskan wilderness and dies of starvation / poisoning while camping in an abandoned bus. It is based on the true story of Chris McCandless who graduates from college, spurns his parents (never communicating with them again), gives his money to charity, and embarks on lengthy travels like a latter day Jack Kerouac. Whatever his motives may have been, I found the film and the device of narration by his sister to be irritating beyond measure. Yes, I know many people like the film and it has won awards – but it's not for me. 3/5 stars –average at best.

Long and slow - Into the Wild review by SD

OK - slow and long, with some good photography.

Difficult to know what was fact and what fiction, not sure the message if there was one came across.

Into the Wild is an astonishing film. Since first reading that Sean Penn was planning it, I'd been keen to see it. A story about walking your own road, challenging received wisdoms and taking risks to live authentically seemed to have found the perfect director and screenwriter. Penn's enormous talent for depth, grace and truth just keep going from strength to strength.

This true story is extremely moving. Easily the best film I've seen this year, by a mile. It's beautiful in many ways. The way the landscape is cherished and photographed brings Brokeback Mountain to mind. The characters are written astutely but gently with grace and compassion and perfectly cast. The music is just gorgeous.

The brother/sister relationship is handled with a very light touch, honouring what was clearly a strong bond between two allies coping with some harsh truths.

Towards the end, during the quietly affecting scenes with Hal Holbrook, it struck me that Into the Wild makes a good companion piece for David Lynch's The Straight Story.

Into the Wild is clearly one of those films that is worth seeing several times. Magnificent.

A thinker - Into the Wild review by CP Customer

Thought provoking, touching and original, if a tad slow. Enjoyed it.