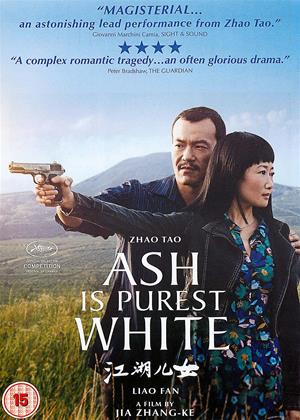 Synopsis:
Oiao (the extraordinary Zhao Tao) lives in a depressed mining town. Her boyfriend, Bin (Liao Fan), is a dashing gangster who works for a corrupt property developer. After his boss is murdered, Bin ascends in rank within the Jianghu (a criminal brotherhood) but finds himself vulnerable to rivals. When they both are arrested, Qiao makes a fateful decision: she takes the blame to save Bin. After five years in prison, she emerges to find her world has transformed. Her former associates have moved into legitimate businesses, while Bin has found another woman.
Qiao seeks revenge, but, more importantly, she searches for a new identity in a changing China - a search that will take her to Three Gorges Dam and toward a powerful revelation.
Actors:
Tao Zhao, Fan Liao, Yi'nan Diao, Jiali Ding, Zijian Dong, Jiamei Feng, Xiaogang Feng, Kang Kang, Xuan Li, Casper Liang, Zheng Xu, Yi Zhang, Yibai Zhang
Directors:
Zhangke Jia
Producers:
Shôzô Ichiyama, Nathanaël Karmitz
Writers:
Zhangke Jia
Aka:
Jiang hu er nü
Studio:
New Wave Films
Genres:
Drama, Romance
Countries:
China

Reviews (5) of Ash Is Purest White

Qiao is a gangster's girlfriend although she often professes that she is not one of them. It's hard to like or care about her: while travelling with her boyfriend in his car, she suddenly announces she wants to drive 100km in the opposite direction to get an ice cream so they turn round and after a few kilometres she says she has changed her mind. She feels nothing for her victims when she scams men she follows into expensive restaurants, but when her ill-gotten money is stolen on a ferry by a fellow passenger, she goes nuts. But her main weakness is her blind, undying love for her criminal boyfriend. Despite being so feisty, she 'stands by her man' and admits a crime in order to save him, and spends 4 years in gaol for him.

The plot is at times shaky and the main characters seem incapable of emotional honesty or able to communicate effectively. It's a long (135 min) and frustratingly unsatisfying watch.

A new classic is born! - Ash Is Purest White review by TE

Wow! Another brilliant film from Jia Zhangke. The central performance by Zhao Tao carries the narrative with mesmerising excellence.

The story is set within the context of an ancient Chinese code of 'outsider' living, giving fresh insights into life in this increasingly powerful nation.

At the same time, it is the age old themes of love and loss that dominate, and the film has emotional echoes of 'In The Mood for Love'.

To cap it all, the cinematography is stunning, with many memorable landscapes and cityscapes.

Qiao is the girlfriend of a mob boss called Bin: together, they enjoy a lot of power in Datong, an old mining town that is in decline. From what we can see, Bin and his motley gang are involved in gambling (they run a gambling den) and real estate (with dodgy deals). Things start going wrong when Bin and his crew are challenged by a gang of young bikers. (It is never clear who they are and what they really want, by the way.)

The film is a combination of social realism (with an insight into life in provincial towns of mainland China, today) and the usual topics found in a thriller (crime, violence, gangs, etc.). But the movie is, really, a love story: that between Bin and his girl, devoted Qiao. They are an odd couple in some ways. Perhaps due to cultural factors -- how do Chinese people communicate their love and talk about their feelings, if at all? -- one gets the feeling that those 2 are never quite able to actually express their emotions in an open and mutually intelligible way. There is something of the Greek tragedy about their fate and how they interact, in muted silence (or near silence).

As a thriller, the film is not a masterpiece: it is moderately interesting. As an odd love story, it is more interesting, despite the fact so many things are left unsaid, perhaps (and probably) on purpose. The combination of the 2 produces a slightly unusual feature film. Many film critics have described it as a masterpiece. I don't think it is. Had it been an American or European film, it would most probably have got more measured and more critical reviews. In some ways, the plot is quite simple and linear.

In a way, the most interesting aspect of the film is the insight it gives into life in a provincial Chinese city today. Overall, I recommend the movie, which will surprise you, or not, as the case may be.

Maybe I just didn’t get it. There are many Chinese movies that I love but this was not one of them. Unlike able characters, dull story. To me a total yawn.

Hard to engage with - Ash Is Purest White review by RJ

Trying to write a review of this film is a difficult task, because it not really have any strong effect on me one way or the other. I certainly didn't find it to be the masterpiece which, as far as I can see, all of the critics did. I didn't hate it either - it was just a moderately engaging, often slightly boring drama that I struggled to find any emotional or intellectual way into.

As with several other of Jia Zhangke's films, it spans a wide period of time (17 years in this case, from 2001 to 2018) and follows the lives of its characters as China changes in the background: towns become unrecognisable; cities are built; the Yangtze is dammed at the the Three Gorges. In the foreground, the narrative first skirts around the edges of becoming a gangster movie before gradually turning into a more intimate investigation of morality and destiny.

Bin is a gangster of sorts, involved in shady property development amongst other things, and is a powerful figure in the underground world that he inhabits. His girlfriend Qiao also occupies a position of power and respect, illustrated by the way she assertively enters the gambling den that the mobsters hang out in, casually thumping each of them on the back. Qiao, following a turf war encounter in which she fires an illegal firearm in order to save Bin from being beaten to death, ends up in jail for 5 years after taking all the blame and saving Bin from serious jail time himself.

So far, so familiar. When Qioa is finally released from jail only to find that Bin has not waited for her and does not wish to see her, the film again flirts with genre conventions and seems briefly as if it may become a simple revenge thriller but ultimately goes in a different direction. Instead of becoming an avenging angel, it seems that Qiao has adopted the righteous moral code of the underground life she knew before prison and this guides her to try and rehabilitate Bin, who has lost his status and later - having had a stroke - the use of the left side of his body. Occasionally, she has the opportunity to take her life in a different direction and leave Bin behind once and for all - in one instance she starts off on a journey with a man who claims to be starting a 'UFO tourism' business and wants her to join him. Shortly into the journey he admits that in fact he is doing no such thing and actually runs a small grocery store. Following this admission, Qiao disembarks the train whilst he is sleeping, but it feels like her decision is not a result of the truth she has just learned - rather, it is her destiny calling her back home and to Bin.

The idea that unearthly forces are guiding Qioa is emphasised when, after leaving the train, she apparently sees a UFO flying overhead. But Qiao's destiny is actually self-created. At some point she decided to adopt her particular moral code and thereafter her life is defined by it. She is seemingly magnetically drawn back to where the film started, in the underground gambling den where many of the old gang still remain. Bin, having been unable to accept his fall from grace, does not share this magnetic pull, and as soon as Qiao has rehabilited him to the point at which he can walk again, he leaves her.

The trouble for me was that I didn't find any of this terribly interesting. I enjoyed Pickpocket and Platform (two of Jia Zhangke's early films), but my recollection of those films is that they were quite rough around the edges - they felt very tactile and the characters in them seemed like real people living real lives. His later work (based on my viewings of this film and 2013's A Touch of Sin) seems too polished to me, as if he has become too comfortable with his working methods, critical status and established audience.

In summary - not a great film but not terrible either. My response after two hours and fifteen minutes was a shrug, and I think I will have more or less forgotten it in a week.