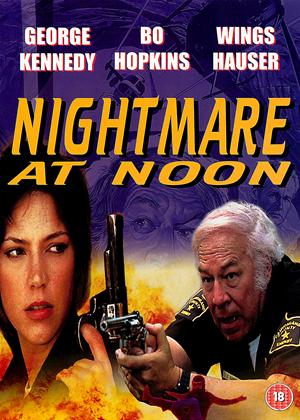 Synopsis:
Mist swirls through the night air as a pair of sinister black vans glide to a stop along the shore of a tranquil Southwestern lake. A group of heavily armed men stand guard while their leader, a pale-eyed albino, raises a high-tech pistol toward the lake and fires, sending a vial of mind-altering, sickly fluorescent green chemical into the water.
Two days later. The windy morning finds Ken Griffith, a complacent entertainment attorney, and his bitchy wife Cheri on the road in their monstrous RV. Stopping to pick up a hitchhiker, a laconic ex-cop named Reilly, the Griffiths pull into the small town of Canyonlands, where the trio watch in horror as Charley, a sweet-faced local, goes suddenly berserk, demolishing a restaurant and running amok in a stolen police car before being brought down by Sheriff Roy Hank, the town's burnt-out peacekeeper, and his insecure deputy daughter, Julia.
Stranded in Canyonlands owing to an electrical failure in his RV (the result of a powerful force field designed by the albino to prevent escape) Ken is directed to nearby auto junkyard. Following him there, Hanks is immediately crow barred by an unseen assailant and Reilly and Ken find themselves engaged in a fight to the death with the junkyard's deranged owner while, back at the police station, Cheri falls victim to the contamination and assaults Julia in a vicious free for all.
That night the group watches as the vans roll silently into town, men with flame-throwers incinerating everything in their path. Hardened in their resolve by the sheriff's death, the trio set out in pursuit of the albino and his remaining men on horseback. Tracking the albino across difficult, rocky terrain, Reilly finds himself pinned down by enemy fire from beneath a massive stone arch. A cat-and-mouse game ensues, with Reilly outsmarting the albino into depleting his ammunition. As they prepare for the final showdown, however, an armed black chopper appears behind the albino, set for a rendezvous - and then is outmatched by the fully loaded army helicopter that materialises behind Reilly. Sundown finds order gradually being restored to Canyonlands. Bidding a fond goodbye to Julia, Reilly climbs inside the metal monster, which slowly disappears over the reddening Western horizon.
Actors:
Wings Hauser, Bo Hopkins, George Kennedy, Kimberly Beck, Brion James, Kimberly Ross, Neal Wheeler, David Christiansen, Mark Haarman, Jean St. James, Tabi Cooper, Todd Collard, Larry Campbell, Bob Miles, Sheri Griffith, Christi Griffith, Pete Plastow, S.A. Griffin, Perry Husman, Scott Mallon
Directors:
Nico Mastorakis
Producers:
Nico Mastorakis, Isabelle Mastorakis
Writers:
Nico Mastorakis, Kirk Ellis
Studio:
Synergy
Genres:
Horror, Sci-Fi & Fantasy

Reviews of Nightmare at Noon