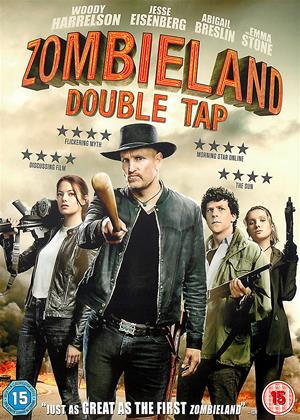 Zombieland is one of those films that never needed a sequal and is probably better off without one.

But it doesnt stop this being an enjoyable romp.

Its makes fun and jokes of everyone but doesnt go so far to make anyone look less of a character. Even the dumb blonde was well balanced, occasionally winning verbal exchanges and seeming to be more a representation of pre zombieland innocence . And the looks shared between her and the main female character are excellent.

Unlike so many modern films there is no OP hero charcter in this, everyone is just muddling through in there own way and they all have there flaws which gives us something to laugh at.

It continues in trying to add its own path to the zombie world and feels like a film made because they wanted to, not to tick boxes or make an absurd amount of money.

This film spoofs many zombie movies. The main event is the repartee between Columbus and Talahasse. It's fun, does not take itself seriously and doesn't try to be anything deeper than an entertaining movie that cannibalises skits from other zobie movies and regurgitates them for comic effect. The pacing does fall off somewhere in the middle, to cram in more guest starts, but the movie is not too long anyway. The 1st movie was sharper and funnier than this one - this one continues the story with the same characters. Light hearted froth - a movie for a Saturday night's entertainment. Don't expect metaphors on life that Romero tried to squeeze into his movies.

Great sequel. Laughed all the way through. Good to see to be original characters back and Bill Murray back in a cameo role. Didn't steer too far away from the original format. If you like that you'll like this

The first film set the scene as a humorous take on zombies. It worked. This is in the same vein but taking the fun further. If you liked the first one, this is even better for my money. The pace never lets up and there is a plot, not just a mindless chase. No depth of course, it is played for entertainment value and laughs. I am hard to please on the laughs front but this kept me chuckling and the action scenes are exciting; hard balance to get right as other attempts in the genre tend to overload the gore but this loads up the eye catching nonsense really well. Get popcorn/Jerky and beer then enjoy a good lark of a film.

A fun followup to the first film ten years ago. I am not quite sure why some found it not as successful and even tired. But I found it funny and entertaining and the new characters added to the enjoyment. Zombies have been done to death, but that doesn't mean the return of the original cast and new additions didn't make for a romp worth seeing. Zombies being slaughtered while the characters battle with their own insecurity was always fun. It was never supposed to be more than the sum of its parts and it all adds up to a light 90 minutes of light hearted slaughter.

I ain't afraid of no ghost - Zombieland: Double Tap review by RD

Mildly entertaining, but let's be honest, there will never be a better zombie film than Shaun of the Dead. This film even copies the whole 'another group of zombie slayers who are similar to the main group'

Bonus points (as ever) for the Murray

I enjoyed this, unlike most sequels it doesn't try to go bigger, bolder or more dazzling (or more boring). Like the first one it just ambles along and the fun comes in the details. The plot is negligible and the game cast entertaining - there are plotholes and a lack of logic, but in a film like Zombieland 2 who cares? It's good for one watch and is worth a look if you are a fan of the first one. It's not scary but I don't think it tries to be, it's more of an action-comedy with gore. This is world's better than Woody & Jesse's other sequel Now You See Me 2 (that was DOA), and it made me laugh, so I ain't mad at it. Zombieland 2 works, because just like the first one, it's just a dumb place-holder and embraces its slacker status.

A belated sequel arriving ten years after the original with a story set ten years on. The trouble is this really struggles to conjure up any sense of fun or originality and appears to be one for diehard fans of the first film. The ten years is one of the key problems because you have to be a real fan of Zombieland (2009) to remotely get the in-jokes that are liberally sprinkled throughout this sequel but now mean very little. The slightly dysfunctional family unit of Tallahassee (Woody Harrelson), Columbus (Jesse Eisenberg), Wichita (Emma Stone) and Little Rock (Abigail Breslin) are becoming fed up with each other and are living in the remains of The White House. With zombies evolving into more dangerous adversaries the two girls head off on their own and Columbus finds Madison (Zoey Deutch) hiding in the shopping mall. They head off to find the girls and then relationship problems become all the more difficult. The need for easy money must be at the heart of the decision to make this film because despite a great vision of an apocalyptic USA and a really funny performance from Deutch as a dizzy and dumb blonde this fails to live up to much. Rosario Dawson and Luke Wilson offer supporting roles and their are some homages to the zombie sub-genre but other than that a forgettable film.

Not as good as the orginal - Zombieland: Double Tap review by MC

I watched Zombieland and thought it was good - Zombieland Double Tap is ok with a nice cameo by Bill Murray in the end titles but isn't a must-see in my opinion.

0 out of 9 members found this review helpful.
Show more

The return to Zombieland finds little to surprise. Like The Walking Dead lumbering through a decade of seasons, more or less pointed out in this film no less, this film finds busy work for our characters rather than a more meaningful next step in their adventure. The entire script is staged for more of the quirks of romance that comes off more as sitcom plots dissected and mashed into a feature film with zombies.

Consider how Columbus (Jesse Eisenberg) is trying to take his relationship with Wichita (Emma Stone) to the next level. They’ve been together for TEN YEARS are just now contemplating marriage. Why now? Well, they’re not getting any younger in the zombie apocalypse. Columbus probably thinks it's safe as well. After all, if there are no lawyers, how could they get divorced? The dating pool is also very small.

But then cartoony aspects take over when Columbus and Wichita take a break, leading to Columbus finding a rebound of a dumb blonde. Madison (Zoey Deutch) is a walking dumb blonde joke, dumbed down in a manner more suited for a sitcom than wickedly cynical horror-comedy. She sticks out like a sore thumb for being a one-joke character. But she’s not alone though. There’s also Berkley, the guitar-playing hippie who only believes in peace and is against violence, somehow surviving without using a gun. He’s attractive to the thrill-seeking Little Rock (Abigail Breslin) and seen as an annoying loser to the cocky Tallahassee (Woody Harrelson). Tallahassee and Columbus will also run into mirror versions of themselves because that doesn’t at all reek of a show desperate for gimmick stories. At least we’re introduced to Rosario Dawson as a love interest for Tallahassee who isn’t a stereotype. She’s not all that interesting but at least she’s not a cartoon character.

Another troubling aspect: Zombieland never goes that extra mile for a payoff. For example, we hear about numerous zombie designations that Columbus explains to us in the intro. We learn that the dope zombies who present no threats are referred to as Homers. We see plenty a few Homers on their adventure but then what of the Ninjas, zombies who lie in wait and kill quickly before you even know they’re there? We’re introduced to them but then never see them again. It becomes clear why. A Ninja zombie seems more apparent in a darker horror picture and this is clearly not that movie. Then why introduce it? We also see a towering skyscraper and if you thought that thing would be on fire or crawling with zombies by the climax, you’d be wrong. What a tragic waste of chaos for a film franchise that prides itself on violence and chaos.

Zombieland: Double Tap seriously struggles for laughs and I question why. The chemistry between the four main characters is still present and strong enough to carry the picture alone. Presenting all these side characters is a gimmick and they get old fast. They come off like pointless distractions in a film with a lot of dead weight. All that’s left is the mere spectacle of Harrelson throwing on a zombie costume and Dawson driving a monster truck over zombies. But aside from some new Zombie Kill of the Week mentions, there’s little else to warrant another outing into Zombieland.