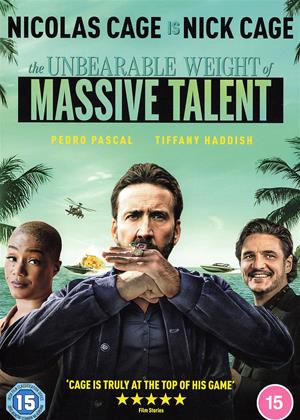 Reviews of The Unbearable Weight of Massive Talent

Nicolas Cage appears as Nicolas Cage in a movie all about Nicolas Cage. Or at least a version of Nicolas Cage that most people have in their minds. My initial perception of such a film was that it was going to take a similar narrative route to how Bruce Campbell was portrayed in My Name is Bruce. To some extent, it does follow a similar path but has much more fun staging a meta-comedy with genuine charm.

Consider how Cage is framed in the film. He plays the washed-up version that most modern audiences only see him for and he bites back. During a therapy session, he speaks angrily about how people complain that he’s in too many movies, remarking that it’s his job and he has bills to pay. He tries and fails to read for new roles that he can never land, despite his willingness to embrace the material with all of his vast knowledge of cinema. There’s great ambition in him that is sadly denied in favor of any meager role he can muster.

His relationship is also strained with his ex-wife and a teenage daughter who are no strangers to his ego. While his ex-wife has grown accustomed to his snob approach to film, his daughter has grown weary of his attempts at parenting. He’s also low on funds, an aspect that is frustrating his agent (Neil Patrick Harris) who can’t land him a gig. He does land one job: A birthday party for the Spanish billionaire, Javi (Pedro Pascal). It seems demeaning but the actor finds he has little choice.

It is during this trip to Spain that Cage finds himself interested enough in Javi to help him out with his film aspirations. At first, Javi is just that one weird fan who really wants his favorite actor to take on a screenplay he wrote. As Javi reveals more about himself being both a film and Cage fan, the aged actor starts taking a liking to the guy. It takes some extra coaxing with shoving a mafia kidnapping plot involving the CIA to force Cage into this situation but the character chemistry between Cage and Pascal makes it all worth it.

The film is a lot of fun in how it uses the screenplay angle to become exceptionally meta. Cage and Javi discuss what their screenplay should have and what would make audiences want to see their film. Really, though, they’re talking about the movie they’re within. This becomes incredibly overt as with scenes where they do drugs and then immediately suggest they should write a scene where their heroes do a lot of drugs. While the drug scene within this film is kinda par for the course, the following scene of them being paranoid while under the influence leads to an absurdly amusing chase through a Spanish town.

The script pretty much writes itself by the third act but the focus on Cage and Pascal makes this movie work. They’re a lot of fun to watch, whether they’re running from gunmen or crying over Paddington 2. What makes this whole setup even more charming is that it pokes fun at Cage’s ego while also letting the actor blow off some steam. There’s even a digitally created version of Cage from Wild at Heart that lets the actor fully lean into that part of his ego that demands he still thinks it’s the early 1990s and that he can take any role. Part of me wants him to embrace this personality while the other wants to keep him in check, a sentiment that this film’s Cage would most likely agree with.

The Unbearable Weight of Massive Talent manages to be far more than just the ultimate Nicolas Cage movie. It does have that aspect considering the actor and the role he plays, despite Cage admitting this was one of the toughest roles for trying to adopt a version of himself that everybody envisions. While it’s fun to watch Cage bring up his previous roles and Pascal gush over his favorite films, the meta-commentary it makes on the desires and frustrations of the film tends to make the movie hit all the more hilarious.