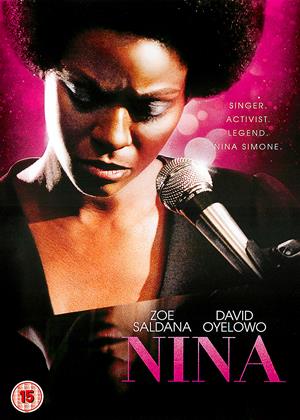 Flawed Biopic of a Great Artist - Nina review by PV

I am a fan of Nina Simone and loved the recent documentary about her - that was better than this and includes maybe the most interesting part of her lifestory, namely when she went to live in Africa in the early 70s with romantic ideas of 'going home', then returned to Europe in rags, living in a bedsit, before 2 white guy managers rescued her, make her take medication, booked her gigs etc. Not a young black man at all. That seems pure fantasy invented to create an all black major role cast. Shame. Racist even. As indeed Nina was in the early 70s, singing 'Kill White Peopl' in one concert.

This movie focuses weigh to much on race and civil rights, as that is the obsession of our age. A better biopic would have shown her early life more. NO mention here she was born Eunice Waymon, for example. No mention that she wrote hardly any of her songs - as one can see if one watches till the end of the end credits. Ironically, white men wrote most of her famous tunes, just like a young white Jewish boy wrote Strange Fruit.

My advice: watch the superior documentary before this. It's called WHAT HAPPENED MISS SIMONE? (2015). Better still, watch some of her concert clips on an online video platform.

But it's not TOO bad. A shame they left out the incident in France a couple of years before her death when she started shooting at kids who were stealing apples from the garden with her revolver. Yes, she was like that. Not much mention of her daughter either or husband (a black cop). If they'd included some mention of her 1980s gigs at Ronnie Scott's in London, that would have been great too.

This is maybe half true and the rest total fiction BUT it hangs together OK, and the music is great. The main actress looks too young and fair-skinned though. Nina is meant to be in her mid 60s in the 1990s when this movie is mostly set (she was born 1933 died 2003).

It's all obsessively focused on racial politics (which our age demands) when it actually should have been focused on Nin's music and life first and foremost.

Nina is a rather odd portrayal of Nina Simone’s life that wholesomely tries to exclude her music career in favor of a different approach that works… sometimes. In fact, Nina is a cloaked endeavor that uses the excuse of the trials and tribulations of a famous person (in this case: the titular character) in order to depict a certain mental illness. In our case, this is the bipolar condition of none other than Nina Simone.

The first mistake director Cynthia Mort makes is jumping straight into the “gut” of things and assumes that every viewer is familiar with Nina’s life up until her 60-th birthday. This approach yields several wrongdoings: first, it makes it hard for audiences to connect on an emotional level, thus missing the mark when the main character is put against emotional or physical perils; second, Nina (the film) rushes to the very end of Nina (the singer’s) life while trying to complete the puzzle by unnecessarily throwing in mediocre edited flashbacks that confuse audiences even more than if these flashbacks weren’t present at all in the film; thirdly and finally, the linear storytelling doesn’t really work for this film and makes for a poor engagement tactic in lieu of everything that happens in the film narration-wise.

The film has its fair share of good moments though: Nina performing in a small bar after which another character remarks that “she should be performing in a large concert venue instead of here”. This is a strong emotional moment that speaks volumes about Nina’s vast legacy superimposed over her twilight years’ downfall in an idiosyncratic bond that’s very refreshing to see. The acting is, let’s say serviceable, with talented actress Zoe Saldana making most out of her material and trying really hard to convey that emotional dissonance that the real Nina often carried as an invisible halo over her head. David Oyelowo does good, but is often overshadowed by Saldana’s performance and this fact makes the two miss their dramatic moments in light of everything that’s been said. The supporting cast is passable, nothing spectacular, but serviceable enough to pass in a film of this emotional magnitude period.

Further, we see Nina’s downfall via her erratic and downright crazy behavior, and this is a problem because there is no real measure to counter this craziness and show what the “sane” Nina would look like. Again, the script makes it really hard for the audience to like the titular character, since she doesn’t show any redeeming qualities whatsoever and is only (thankfully) salvaged by Zoe Saldana’s top-notch performance. If it weren’t for her, this film would’ve probably ended up in the annals of Hollywood’s forgettable tries. Also, the narrative thread of the “angry black woman” has to be ceremonially buried so we don’t end up digging and overusing it yet again (for reference, see The Oracle from a little 1999 flick called The Matrix).

But, is this film worth a viewing? Probably. Probably one.