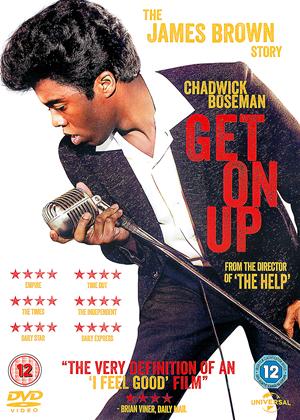 Biography of a great man - Get on Up review by JD

James Brown is depicted as having a really hard childhood and growing quickly into a very confident almost arrogant man, sure of his own ability and definite about his fate. Not sure if I believe it all. He and the actor playing him are fantastic at the splits, the bounce up and the mashed potatoe. I was so inspired that I got completely into funk for weeks afterwards. You will feeeeeel good.

Get on Up review by Michelle Sommerville - Cinema Paradiso

When we are not being bombarded with remakes, sequels and prequels, we are sure to spy a cinematic biopic on the big screens. Get On Up is the story of the infamous James Brown, that has been in the pipeline for almost fifteen years, and was finally released this year. Produced by Mick Jagger, you know it will focus on the music like a laser beam, and after all, that is what Brown should be known for.

The film begins with James Brown on his way to a performance, talking about his life experiences, and how he became the man he is still known for today. From his penniless early childhood, and bad choices that landed him in prison, Brown discovered that music was his passion. Fighting against his own issues, racism, and the music industry of the time, Brown creatived an identity and future for himself. Not every decision he made was healthy, and he became his own worst enemy, but it is still the music that had the ability to shake some sense into him. We know how the story goes, but there is still so much more to the man.

I went into this not really knowing anything about James Brown. I had heard his name before and some details of his life, but that was about it. That is why this film is great. It allows a whole new generation to experience Brown’s music and find out about the man behind it all. It is very much a character study as opposed to dealing with other issues in too much depth - i.e. the war, the black struggle, etc. Obviously it would be technically nigh-impossible to include 100% fact about the life of James Brown, but they did a good job.

These actors must have spent a very long time researching all of the intricacies of these characters, because their performances were spectacular. After this - and his amazing work in 42 - I doubt Chadwick Boseman will have to take minor roles again. He has blasted the competition away and is a perfect leading man. He even did all of his dancing, and some singing! The supporting cast were amazing as well. Viola Davis and Octavia Spencer, for instance, have continued to prove why they are right for the roles, and it’s great to see them doing so well.

The seemingly minor details like the costumes and scenery were also perfect. You actually felt like you were back in time.

The film has done overwhelmingly well with both audiences and critics alike. Any shortcomings in the film are more than compensated by Boseman’s performance.

This film is great for those who love James Brown, and those that know little about him. It does contains some violence, drug use, and sex scenes, so don’t go showing this to your little kids. Definitely worth watching, and get ready to see Boseman on your screens more.