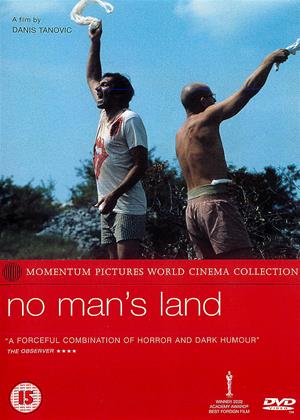 Manages to be both profoundly “human” and terribly cynical at the same time.

An incredible story, told with humour but very dark in the end. The actors were extremely believable, it did suck me in.

Some incredible lines… like this bosnian soldier in a sad trench, reading the paper and going “what a terrible mess they're in, in Rwanda!”

Worth A Look - No Man's Land review by CP Customer

An enjoyable film. No big names or big plot lines but the plot that unfolds symbolises the wider tragedy and farce of conflict and international politics.

Definitely worth a look.

Not a popular view on a popular film. - No Man's Land review by DS

No Man’s Land garnered a lot of awards and was feted for being a realistic and funny depiction of the futility of war.

If nothing else this film shines a light for us fat and comfortable Europeans who saw the events on TV for a few months and then promptly forgot about them.

Directing Tanovic clearly tried to condense something of the conflict down into a manageable personal conflict. It is not the first time someone has tried this nor the last, this type of film certainly has been better made and definitely worse. Tanovic’s effort falls between the two stools. You can see what he wants to say, you get the funny and futile message he makes but at times it appears to be simplistic and childish.

The start of the film certainly shows the amateur and foolish side of war. There are no slick heroes here. They get lost and ambushed. No one really seems to have much of clue of what they’re doing. Instead of being slick cohesive units who know what is going on these ‘war heroes’ are scruffy, unmotivated, clumsy, scared and barely much use to anyone.

When we get down to the on-off three-hander in the trench things start to come a bit unstuck and clunky metaphors start to leak in. It seems to be obvious who the director things the real baddies are and what each of the characters represents.

For instance, one side seems to have a lot of overweight, unshaven slobs in their ranks. I don’t think this is a coincidence. One dead combatant is shown to be gay by having a picture of a nude muscled hunk in his wallet. This is treated by the character who finds the image with much disdain. It’s a bad thing, funny even, there is no doubt about the director’s message here.

Georges Siatidis is superb when he shows up as the hopelessly powerless UN sergeant only allowed to observe but who really wants to intervene in the carnage. Then we get Simon Callow playing directly opposite this as lazy, uncaring UN general who at first doesn’t want to leave the comfort of his office and sexy assistant and then when he’s forced to wants to get out of the situation as quickly as he can without any regards to anyone else. I’m sure the drama and conflict of what people wanted to do and what they had to do and why they had to do it could have used a slightly more subtle brush.

Katrin Cartlidge is the only female character of any note but I found it confusing for some time what here charactering was representing? Any other example of the west just being disinterested voyeurs, but Tanovic makes our mind up with giving her character some telling dialogue about murder and then makes her dispassionate near the end about the outcoming of her ‘breaking story’. As I’ve said before a bit clunky. A more interesting question would be, ‘if you take sides, how do you decide which side?’ Perhaps that is a question for another film. Nevertheless, she does well enough with her ‘writ large’ role.

The story plays out with mainly a big broad strokes to its conclusion – unsatisfactory and stuffed with more metaphors but as I said I found it unfulfilling.

The acting wavers between great and a bit wobbly and despite being labelled as surprisingly funny the laughs are sparse. Having watched a lot of films over the years I am well aware of the horror and stupidity of war so when a film comes along and says this again it has to be well acted, interesting and say something new for it not to get stale. I liked the vivid green of the Bosnian countryside which made a big difference from a lot of muddy brown hell-holes but for me, something was missing from the whole film.

No Man’s Land has its good points and while I feel that it is not the Emperor’s new clothes it definitely is wearing his jacket and tie.

Superb film about war - No Man's Land review by PV

This film manages to chieve what so many movies about modern wars do not: it is entertaining as well as being dark and ironic. Most films about the former Yugoslavia or Africa or Iraq etc and terribly worthy - and didactic. This is darkly funny and entertaining - which makes it far more moving and worthy than those other movies. This film is superbly paced, with great dialogue, nice twists and an ending that perfect sums up to insanity and inanity of war. Superb!

An anti war classic - No Man's Land review by JS

I loved this film as it got more and more absurd (deliberately) as the plot developed. The sending up of all parties in the Bosnian conflict and the illustration of the utter stupidity and yet cruel sadness of it all was impeccable