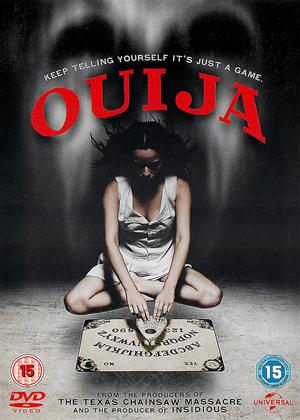 Synopsis:
Laine convinces her group of friends to use a Ouija board to make contact with their recently deceased friend Debbie. When they return to where Debbie died in an attempt to reach her, they discover disturbing film footage Debbie recorded of herself after she found the Ouija board, leading up to her brutal death. The friends soon learn that they have awoken a dark and terrifying power that begins to haunt them, and that the only way to break the connection with this darkness... is to play the game again!
Actors:
Olivia Cooke, Ana Coto, Daren Kagasoff, Bianca A. Santos, Douglas Smith, Shelley Hennig, Sierra Heuermann, Sunny May Allison, Lin Shaye, Claudia Katz Minnick, Vivis Colombetti, Robyn Lively, Matthew Settle, Afra Sophia Tully, Claire Beale
Directors:
Stiles White
Producers:
Michael Bay, Jason Blum, Andrew Form, Bradley Fuller, Bennett Schneir
Writers:
Juliet Snowden, Stiles White
Studio:
Universal Pictures
Genres:
Horror, Thrillers

so much better than expected - Ouija review by CP Customer

Enjoying Horror Films is like a box of chocolates. Most are coffee ( I don't like coffee ) but some are real chocolate ( love that ).

I didn't expect much from this film at all. especially when it looked like it might be a found footage type of thing. I enjoyed it a lot. The pacing was good and whilst you knew everything that was going to happen it felt reasonably fresh (if you get what I mean). THe acting way good as well and the atmosphere was spot on.

I really enjoyed this film , its a bit like a teenage horror but not a bad one at all. Group of them try to make contact with their dead friend by using the ouija board . I'm glad I watched it , it kept me watching all the way through.

In 1890, businessman Elijah Bond introduced the Ouija board as a commercial product. It was a parlor game referred to as a spirit board in which participants would place their hands on a planchette hovering above the board. Supposedly, spirits would lead the planchette across the board of letters and numbers to communicate with the living. Of course, once the planchette starts moving, it feels more like a guessing game of who is moving it. It was later deemed more supernatural by spiritualists who try to find ghosts and demons in anything. From that very thin concept for a game that is primarily played at sleepovers, Platinum Dunes has warped the board from wood to screen in a thoroughly confusing and tired horror film. There are some deeper origins in the assembly of the planchette, but that would be far too intriguing for this throwaway thrill.

The movie begins with a gaggle of girls trying to scare themselves by contacting the dead with the infamous board. They get a little spooked and stop. Years later, the girls have turned teenager and Debbie finds herself digging the old oak out for a singular contact with the other realm. After some moving of the planchette, she tosses the board into her active fireplace as if the board had been tormenting her throughout her life. But to her surprise the board returns and the planchette apparently turns her eyes completely white. It apparently doesn’t blind her as she is able to pick up the plugged in Christmas tree lights, fashion a noose out of them and hang herself from the second story of her house.

After the funeral, her friends find the board as well and for some strange reason decide to play the game. There’s hardly any explanation given for this as the plot has to keep moving. They all gather around a dark room and attempt to speak with the dead. The planchette moves and responds to their queries. They assume the spirit moving along the board is the ghost of Debbie as she warns them of a crazy mother. One of them picks up the planchette and Debbie can be seen from the glass piece with her mouth sewn shut. She points to another ghost which is a screaming old woman that attacks them. Golly, gang, a mystery needs solving!

The mystery does attempt to throw a few twists into the mix with discovering the scary child and mother that haunt Debbie’s house. The problem is there is little explanation given for any of the creepiness. The ghost of the house apparently can take hold of your body once you look through the planchette which makes your eyes go white and your mind suicidal. But the rules keep changing as others who have the look of death in their eye can infect others with a shocking scream. What is this evil force that consumes them and why does it need them to kill themselves? It’s revealed by a surviving elder of the old, dead and crazy that the only way to stop all the madness is to burn the corpse of the ghost and the ouija board. Except we’ve already established that burning the ouija board does nothing but bring it back.

Even if you can toss all the supernatural nonsense with no rules, this horror film screws up the one thing that could’ve saved it: the scares. Not only are the frights not scary, but they give warnings far in advance. Word to the wise for directors who want to do jump scares: don’t build up any anticipation by placing in moments of brief quiet. Such build has to warrant a terrifying visage and not just the expected tricks. Maybe it’s now a requirement by the MPAA that PG-13 horror movies need to have that advanced warning for anything scary.

Ouija could have had the potential as one of those amusing ghost stories for teens, but it squanders any logic or terror that may have been there. In other words, the movie plays out exactly like you’d expect with a thin script and light attempts at horror. I’ve never actually played with a Ouija board before, but I wager it’s probably a lot more fun than the cinematography in this movie makes it out to be. In that sense, Ouija appears more like an elongated commercial for the game complete with a visible spirit grabbing one’s hand and guiding it across the board. But, wait, if you can see and hear the spirit at some point, why does the ghost need to use your hand to speak? I can just see Platinum Dunes taking a shot at making a spooky Magical 8-Ball picture in which a visible ghost makes you shake the ball so that it can speak.