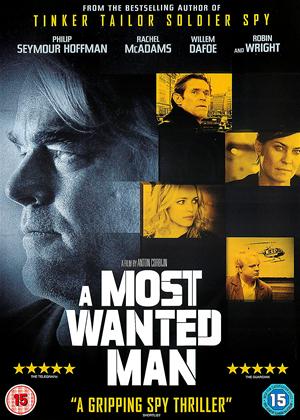 It's great to see that all reviews of this film so far are positive, either 4 or 5 stars no less. Why? Not because it is Seymour Hoffman's last film, though that does add poignancy, but because it is the sort of thriller that just does not get made any more. By that I mean it has none of the lame bang 'em, shoot 'em up action of your normal Hollywood offering, it is intelligent, it is believable, it is relevant, and it packs an altogether more satisfying punch because of that. I thought the script and directing were excellent, and there is class acting throughout. Even that old ham Willem Dafoe is good, and as for Rachel McAdams, what a revelation! Watch for the "explosive" ending - extremely rare to see one that is so relevant to all that has gone before, yet still catches you unawares. All in all, a great film, up there with The Lives of Others.

If you want lots of action, shooting, car chases, dare devil stunts etc in your spy thrillers then this film is not for you. If you want to watch restrained yet brilliant acting from Philip Seymour Hoffman - able to speak volumes through a glance, through a single facial expression - then it's a masterclass. The story builds slowly but surefootedly to its devastating climax. There are questions left unanswered by the end about some of the characters - but does that matter? That very ambiguity allows the viewer to use their own intelligence rather than needing spoon feeding all the background information. Visually it was great, wonderful symbolism in the photography, from the opening shot to the closing one. The only thing I would change is some of the accents, supposedly German - difficult to work out what was being said in some instances - at least watching on DVD can rewind and listen again if it feels you've missed something crucial. Overall an intelligent and engrossing film, would recommend it (as long as you don't crave action, shooting etc)

This film hooks you in the first few seconds and doesn't let go. I sat transfixed watching it (and used subtitles to better understand all the dialogue). It's from a John le Carre novel, so except lots of twists and turns.

Philip Seymour Hofman in what I think is his last role gives a superbly understated performance.

The labyrinthine layers of the secret service - or rather, secret services - and their skulduggery, competition, betrayals etc are dissected as the plot moves forward and the characters develop.

A really superb thriller, which I could watch more than once. This is in a whole different league to the usual Hollywood shoot-em-up movies about the same subject.

A very timely film too. I watch this the day before Jihadi John was named, and have just been looking at some so-called 'charities' for Palestinians and Syrian relief which syphon off a proportion of funds to send to Islamofascist terrorists. This film does not exaggerate a thing - this stuff is happening right now.

Dull, slow and annoying casting. - A Most Wanted Man review by RW

A really disappointing let-down of a film. Characters you don't care about, fail to understand, a total lack of tension and terribly slow-paced. However good some of the actors may be, it's unforgivable that English-speaking actors spoke English with cod German accents when alone with other supposed German natives. Not casting German-speakers and using subtitles jars horribly.

Homeland does this kind of thing a thousand times better.

Intelligent Thriller - A Most Wanted Man review by Rob S

Well what a pleasure to see Philip Seymour Hoffman in one of, if not his last, film appearances and boy does he own this one. He's in most of the scenes and plays the part of a the head of a German undercover security force based in Hamburg aiming to prevent terrorism post 9/11. The film, based on a John Le Carre novel, follows a detailed but, to some, slow (not boring) story with only a few action scenes, but it is worth sticking with for the finale of which I won't say more. The film is brilliantly filmed by ex photographer (I know his work from various Depeche Mode projects) Anton Corbijn who has a real eye for detail and the fantastic architecture of Hamburg. All in a good watch and recommended 8/10

This is a very watchable film - up to date with its ideas, possibilities, plausibilities.

Good slow-burning film, not so much a thriller as an intelligent observation of real-life and what could be/would be/can be happening in areas that 99% of people would not inhabit. Totally unexpected ending that threw me completely. Recommended.

A very well thought out storyline, script and movie. Superb acting throughout. Somewhat complicated to begin with but the story and characters unravel as the film progresses. Brings home what a very sad loss to the film world the demise of Philip Seymour Hoffman was. Can't fault this one.

Seymour was just getting the hang of playing plausible people. Shame he went under. Holds attention most all the time.

Clever, well made, well acted and gripping. - A Most Wanted Man review by JR

I'll probably be repeating a lot of what others have said in this film, but I found it completely gripping, watched it with two other people and not a word was spoke throughout the film as we were all engrossed in it. That should be recommendation enough.

Extremely well shot, and lovingly made. it's not an action thriller as such, but the way the film meant that action wasn't needed and it focused more on character development and insight. Phillip Seymour Hoffman, is great, as a head of a small hidden anti-terrorist unit, who has his demons, but these aren't overly stated by him and don't dominate his acting, in fact he plays the role perfectly.

Rachel McAdams (of whom I'm not often a fan) is great as well, as is Daniel Bruhl and the sense of antagonism between her and Hoffman is perfectly played.

Very sad that this was PSH's last film, and I couldn't help looking at his character and thinking what he must have been going through at the time it was made, probably added to why his character was so believable.

So a firm recommendation and I hope you will be as captivated as I was.

Engaging political thriller - A Most Wanted Man review by ChrisB

I agree with AM's review above almost word for word. It really is a most watchable thriller, mainly due to the acting talent on show and a believable plot. Lots of twists and turns and you really can't guess the final denouement.

A Most Wanted Man review by Mark McPherson - Cinema Paradiso

In one of the final roles of his career, Philip Seymour Hoffman seamlessly blends into the role of a world-weary German espionage agent dealing with Muslim affairs in Hamburg (the home base of the 9/11 hijackers). His quiet and gravelly voice with his tired expression come almost too naturally to Hoffman. One has to wonder how much of this was either just acting or drawing from his own life of personal demons. It’s a tragic reminder of a once revered actor, but also one of the best elements of an otherwise ho-hum espionage thriller.

In the post-9/11 setting of Germany, Chechen/Russian refugee Issa Karpov has illegally entered the country seeking asylum and is suspected to be a terrorist. Gunther Bachmann (Philip Seymour Hoffman) leads an agency that spies on the Muslim community. His aspirations are not too high having been demoted to this position without the proper trust or materials to carry out this level of security. In addition to tailing Karpov, another target is Dr. Abdullah, a Muslim philanthropist believed to be funneling in money for terrorists acts. They’re naturally going to cross paths. Further complicating these investigations, however, are some interested parties that include German security official Mohr (Rainer Bock), American diplomat Sullivan (Robin Wright) and immigration lawyer Annabel (Rachel McAdams).

Bachmann does his best to play everyone in hopes that he can find out more about Karpov before his team nabs him. He holds Annabel in his custody for secretly aiding Karpov, hoping she’ll help him out. He does his best to keep Sullivan at bay in hopes that her influence won’t spring the trap too early. Oh, and there’s a banker involved as well (Willem Dafoe) who is holding the money of Karpov’s father. There are so many characters at play in this little dance of immigration and terrorism politics, not including Bachmann’s superiors that play a role as well.

Director Anton Corbijn does his best to create tension from a cold and quiet thriller. Not a single gun is fired, there’s barely any fights and the climactic car crash is far too quick. It’s an intricate spy game where characters appear two steps ahead or behind their allies and enemies. Just when it seems Bachmann has a lead, he’s just a few hours late. Just when Karpov has found an out, the hole gets deeper. It’s a frustrating game of stops and starts bogged down in the bureaucracy of trying to keep things safe and legal. Bachmann hangs for dear life to keep that thin thread intact amid the shears of a pushy government and dangerous terrorists.

Yet the mundanity of it all is ratcheted down to a level that requires the highest of attention levels. As a thriller, this isn’t much to keep you on the edge of your seat considering the wide enough margins between Karpov and the government. The film does its best to create some real tension from such small events as when Bachmann bites his nails if a bank document is signed. But it works best as a portrait of lost humanity in a world that has lost its trust for foreigners. Hamburg appears as a depressed metropolis of unease and a populace of uncertain intentions.

A Most Wanted Man is a meticulous thriller, slow and drab, but kept intriguing through Philip Seymour Hoffman's performance alone. He embodies the damaged human spirit of a world gone mad with paranoia on all fronts. His stumbling and mumbling show all the wear and tear of a dinosaur for a secure society without too much government or unchecked terrorism. It’s a depressing, yet telling performance that hits home a little hard for such a focus on a once great actor. Hoffman is the glue that holds this concise tale of a plot-heavy investigation which may be too detailed and lethargic for its own good.