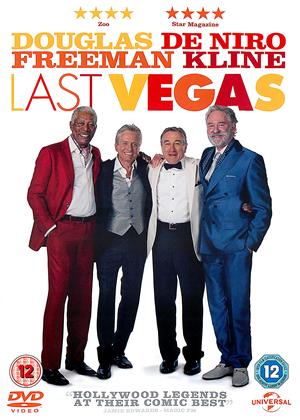 If I did not know better, I would have thought the stars had participated in this movie because they needed the money. With their immense acting ability, whoever talked them into doing this one must have had immense powers of persuasion. It's crass, shallow and has minimal entertainment value

Feel-good plus - Last Vegas review by AS

Four of the coolest guys you'll ever see, living the coolest life in LV; and with Mary Steenburgen along. What more could you want?

Touted by many as the Hangover for the over fifties I had fairly low expectations for Last Vegas, despite a few members of the cast who have starred in some of the best movies ever made; in this case there is nothing for even Morgan Freeman or Robert De Niro to work with and I can not comprehend any reason why they would even consider lending their name to such a piece.

With Michael Douglas in the central role Last Vegas is the story of four pensioners who throw a sudden bachelor party for the long single and wealthy Billy (Douglas) who in a sudden fit of fear of his own mortality proposes to his 30-something year old girlfriend, at a funeral, whilst giving the eulogy.

The level of class involved in the movie can hardly escalate from this point and what follows is an entirely unimaginative, humourless and contrite one hundred odd minutes.

What I find the most unappealing about films of this nature is not the idea of the old and elderly being sexually active or the largely socially disregarded idea that life ends at 40 and God forbid anyone older than that attempt to have fun, is the lack of class or depth that is inherent in such depictions of the aging population. It takes a significant absence of writing talent to create a character than even Mr Freeman can’t bring some life to; these characters are little more than caricatures, the humour present in them found only in the ways in which their bodies and minds are no longer able to provide them with the same freedom as young men. Ultimately such depictions are painfully prejudiced and stereotypical – yet on the other hand I can not help but be mildly pleased that Hollywood is actually making movies about an older generation in a world with an increasingly aging population. I can’t help but ask myself: is tripe like Last Vegas in fact a small victory in the world of equal representation? Or is it reinforcing negative stereotypes?

Thankfully, or perhaps not, because of the unimpressive nature of the film itself it’s likely that either way very little people will be viewing it anyway.