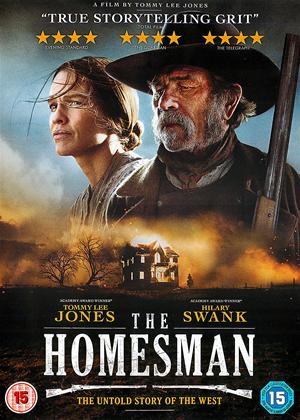 Reviews (7) of The Homesman

Old West not so glam. - The Homesman review by NC

Tommy is old and wind swept, and talks with the yee-ha accent he seems to have now made his signature in all films. Try to get some empathy with him, but at the end is a slightly thick, self indulgent, simple cowboy........so probably a pretty good cameo of the times!

BORING - The Homesman review by RG

What can one say - a waste of time, its slow. its boring - the story line is extremely thin and suffers from what one can only describe as an amature film with amaturte actors portraying a uninteresting role !! .

Moving and harrowing - The Homesman review by AK

I thought this was a brilliant film and very moving. Focusing on the hardships for women on the frontiers of the West during the mid-19th century, it is a most unusual cowboy film, covering aspects of frontier life that have rarely been featured before. Beautifully filmed and acted, it is a very poignant movie, wonderfully directed by Tommy Lee Jones, who also takes the co-stars as the old and apparently unredeemable deserter and claim jumper. Hilary Swank's performance as Mary B Cuddy is outstanding.

A let-down - The Homesman review by SC

This film was very disappointing. On the face of it there is a storyline, showing the difficulties faced by a single woman traversing

the West, and how women suffering mental distress were treated (taken to a parsonage and away from their families} but

the plot wore thin when the heroine died, and the cowboy showed himself to be superficial and feckless.

I felt that I had wasted two hours watching this.

Powerful and perfect - The Homesman review by AS

Acting doesn't come any better than this. Tommy Lee Jones and Hillary Swank are superb in their portrayals of Glendon Swarthout's characters from his award-winning novel. Jones also confirms himself as a first-class director, imbuing the movie with the same gamut of emotions as the book, capturing the bleakness of landscape and lives while deleting very little from the source material. Beautiful, tragic, a near-masterpiece.

I really enjoy non standard films i.e. one I cannot work out the ending, and this one fits that bill perfectly. It shows the hardships that people in the wild west endured I liked this film

Emotional, complex, and not for the faint of heart. These are just a few words that describe the 2014 film The Homesman. This film is unlike any you will normally see at the cinema, and takes storytelling to another level. With an intense focus on its well-scripted characters, the actors’ performances are all the more outstanding in the spotlight. It is one of those films that deserve such a high star-rating, but it is not one you will want to watch again and again.

The Homesman: Three crazy women, one independent female carer, and a male drifter. This is the group we follow as they attempt to ride across the American outback.

It is not the story we concern ourselves with; but with the characters.

Veteran actors Tommy Lee Jones, Hilary Swank, William Fichtner, John Lithgow, James Spader, and youngsters Jesse Plemons, and Hailee Steinfeld. These are only some of the amazing actors that bring these characters to life. They are big name stars that play both major and minor roles, and you can be sure about one thing: to get such high calibre actors like these, you just know the script and story are something special.

The film’s focus on mental issues in the American West is something I have not seen before. Mental issues have not just arose in the last few years. No, people have been suffering from them for almost as long as there have been people. It is an important issue to explore, and this film has done it with respect. It was researched greatly, making it not only socially important, but historically important. These are not the stories you will read about in your school textbooks.

Helping to set the scene was the stunning direction by Tommy Lee Jones. We gain an intimate connection to these characters, which is starkly contrasted by the wide-open expanse.

Even the soundtrack added greatly to the atmosphere of the film. Its inclusion of wind sounds mimicked the constant flows of wind the early settlers would have been tormented by.

The Homesman has received mixed to positive reviews. Audiences and critics alike are naming detail after detail that they found excellently crafted and executed. The only issue with this film some viewers have noted, is that the story is slow-moving and is very different to the majority of films at the cinema. Its story is more character-driven, and less plot-driven, and this is not what younger adults are accustomed to. However, even those of the older generations who grew up watching American Westerns will not find this familiar, as it is also far from the cowboy ‘shoot ‘em up’ films. It is almost a breed of its own.

Its intense story, violence, sexual content and disturbing behaviour makes it inappropriate for children. This does not mean it should be avoided. It is a remarkable film that is already nominated for numerous awards, and is sure to be included in an assortment of Academy Award categories.