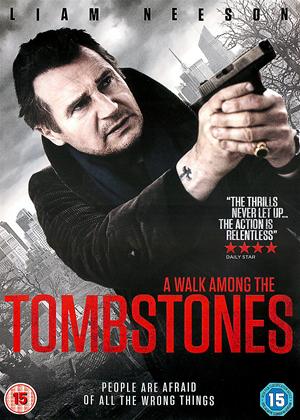 Rent other films like A Walk Among the Tombstones

Reviews (3) of A Walk Among the Tombstones

Liam Neeson has a distinguished acting career, probably peaking with his leading role in Steven Spielberg's 'Schindler's List' in 1993. But from 2008 onwards he has re-invented himself as a (somewhat elderly) all action hero, first with his role in 'Taken' (and a couple of sequels), 'Unknown', 'The Grey', 'Non-Stop', and this film - 'A Walk Among the Tombstones'. (I might have missed one or two - and I'm not counting the 'Batman etc' films).

This time round Liam's character is an ex-cop, a recovering alcoholic, acting as an unlicenced private investigator. He accepts a commission from a drug dealer to find the men who kidnapped his wife, took off with the ransom money - and returned the wife in pieces.

It's a dark, gritty film. The victims are the wives and daughters of drug dealers. The kidnappers are violent psychopathic killers, probably insane. In tone I would compare the film to the TV series 'True Detective' - it's very dark. [Aside: be aware that the film was cut by the UK distributors to get a 15 certificate - but it's definitely 18-type material]

It's quite slow moving - there are no car chases, the central character walks everywhere, and although there is violence the worst is off-screen and there isn't the silly fisticuffs that seem to pop up every few minutes in most 'action' films. But then Mr Neeson was 61 when this was made - how long can he keep up these 'action hero' roles?

If there is a down side, it's that of the teenage TJ/Astro - I found him most annoying and a severe distraction.

Great, dark stuff. I found it gripping and in my opinion it's Liam Neeson's best film for a while. 4/5 stars.

Hard to remember when Neeson did Schindlers List, and quite a few acting roles without guns.

He seems to do nothing but seedy ex-cop/vigalante type films now. He does do them pretty well though. Bit like Hopkins becoming the serial nutcase killer.......... far cry from his previous roles

Liam Neeson, as always, is Liam Neeson, but he makes a pretty good Matt Scudder as portrayed in Lawrence Block's series of novels. The pacing and feel are also reminiscent of the books, a good job by the director who doesn't fall into cliché mode of camera zooming around to overloud background music as per 'Miami Vice'. The plot is tight, the action convincing and the various characters neatly fleshed out. It is to be hoped we see this Matt Scudder again.

A Walk Among the Tombstones review by Michelle Sommerville - Cinema Paradiso

No, this is not another Taken film, but it does seem close. This film is darker than that franchise, and is an improvement that shows off its star - Liam Neeson’s - immense talent even more. It is an old-school action film, and Neeson is plain and simply awesome.

A Walk Among the Tombstones: Neeson is Matt Scudder, a former cop turned private eye. After first refusing the job, Scudder finally agrees to help a known drug dealer find the men that not only kidnapped his wife, but killed her after the ransom had been paid. Scudder soon learns that this is not the first time the group have done this, and when they kidnap another girl, he sets out to find them and make them pay.

Any review on this film should begin with: Liam Neeson is awesome. There is no denying it. He has been very kick-ass in his film role choices, and he more than deserves all of the roles he has been getting lately - not to mention all of the attention. He is not just a brilliant action-genre actor, but has shown over the years that he can pretty much play any role they throw at him. With A Walk Among the Tombstones, he is more than capable of turning a generic good-guy-bad-guy action film into something more than just entertaining.

However, the film couldn’t be as good as it is without a good script. The story - based on the book of the same name by Lawrence Block - is full of moments of suspense and plot twists that make the finished product more than just shooting and car chases.

The look and feel of the film is gritty and noir-esque, which makes it more interesting. The director Scott Frank (who also wrote the screenplay for the film) hasn’t done as much directing work as he has done writing work, but with the cinematographer Mihai Malaimare Jr., they have created something striking.

It is not usual for films made from books to be successful, but this one is doing quite well for itself. It has been a long time in the making - since around 2002 - and it was back then said that Harrison Ford was originally going to play the lead. Ford is a great actor too, but the novel’s author had always pictured Neeson among his top choices for the lead character.

Reviews have been adequately positive. There has been much praise for Neeson’s acting, the directing, and the script. The cliche aspects have also been criticised, though its improvements of the story and perfecting of the genre have compensated for this.

Action films have always been popular, and A Walk Among the Tombstones is an action film done right. Parents and guardians might not want to have it on while their kids are in the room - due to the violence, etc. - but it’s nothing overly gory. Enjoy!