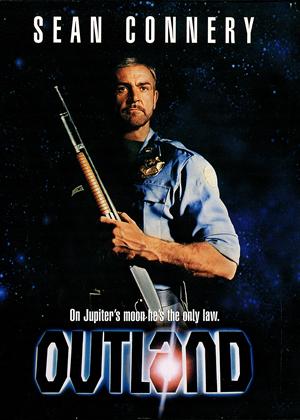 Sign up
A Nightmare on Elm Street 2: Freddy's Revenge

Sean Connery is not usually to be found in sc-fi films, yet here he is in 'Outland', set in a titanium mining colony on Io, one of the moons of Jupiter. He plays the role of Marshal O'Niel, head of security in what is essentially a semi-lawless sort of Wild West frontier mining town.

In fact there are so many similarities to a Western that the film has the reputation of being 'High Noon' set in space. And indeed, there are similarities - most obviously the shuttle arrival countdown clock.

With good acting support from Frances Sternhagen as Dr Lazarus (?!) this is an enjoyable romp as Connery comes under attack from armed baddies as he hunts for those supplying drugs to the miners.

All good fun, nice to see Mr Connery in a (for him) unusual role and despite the dated technology that inevitably haunts sci-fi films made 30+ years ago, this is a good watch.

This film has a reputation for rather obvious High Noon references, and they are indeed immediately apparent. There is an underlying conspiracy plot in the film, but not a very obscure one, and it is revealed quite quickly.

Having said that, this is quite a well made and enjoyable film. Not particularly complicated to watch and not needing too much concentration, and I enjoyed it for the acting.

One bafflement exists in my mind though. Given Connery's accent and his screen wife's accent, why does their son have a broad American accent when he hasn't yet even been to Earth, let alone the USA?... Miscast.